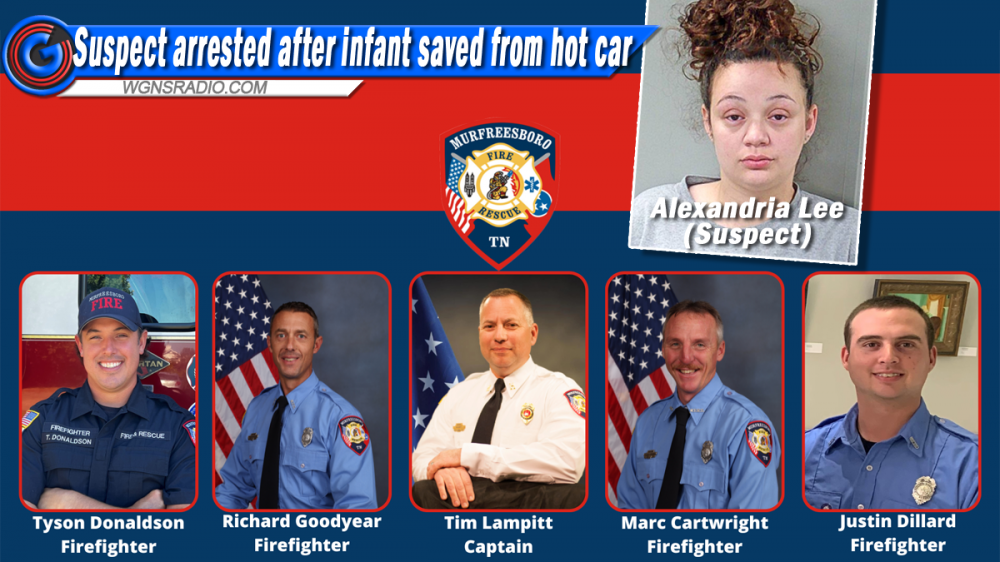 MURFREESBORO, Tenn. – A five-week-old baby locked inside a hot SUV was pulled to safety by fast-acting firefighters who broke the windows and removed the infant.  An off-duty nurse assisted with other life-saving medical care until medics arrived.

The incident occurred in the parking lot of Kroger on Old Fort Pkwy. on Monday, June 13 at 5:16 p.m.

Murfreesboro Fire Rescue Department (MFRD) Engine 9 Firefighters Tyson Donaldson and Richard Goodyear broke the windows of the SUV, a 2013 Ford Escape, with a window punch. There were able to get the infant out of the hot SUV.

The baby was beneath blankets and strapped in a rear-facing child passenger seat. The infant was extremely hot, sweating, and barely breathing.

“The SUV was not running, and the infant had been inside the hot car for about 20-minutes,” said Donaldson.  “Our number one priority was to get the baby out of the hot car as soon as possible.”

The five-week-old was immediately taken to a Murfreesboro Police Department officer’s patrol car to cool down in the air conditioning.  Engine 9 crew members Captain Tim Lampitt, Firefighter Justin Dillard and Engineer Marc Cartwright assisted Donaldson and Goodyear with other life-saving medical care on the infant.

“The outside temperature was 97-degrees at the time with a heat index of 108-degrees,” Donaldson said. “Without a doubt, the beautiful baby is still on this earth, thanks concerned citizens, emergency personnel and the off-duty nurse.”

“We want to remind parents not to leave children or animals unattended in a hot car,” said MFRD Assistant Chief Medical Services Jeff Wright.  “It is not only dangerous, but potentially deadly with the extreme temperatures we’ve been experiencing.”

The baby, now seven-weeks-old, was evaluated at the hospital and is expected to make a full recovery.

The original call for service was for a welfare check.

A customer became concern after seeing the woman acting strange in parking lot and alerted store employees who called police.

An officer responded and found the woman, 27-year-old Alexandria Lee, standing outside the locked SUV, swaying to keep her balance, and appearing to be spaced out.

Police found a half-empty opened bottle of Tequila in the car.

Lee was arrested and is facing driving under the influence, and aggravated child neglect/abuse charges.