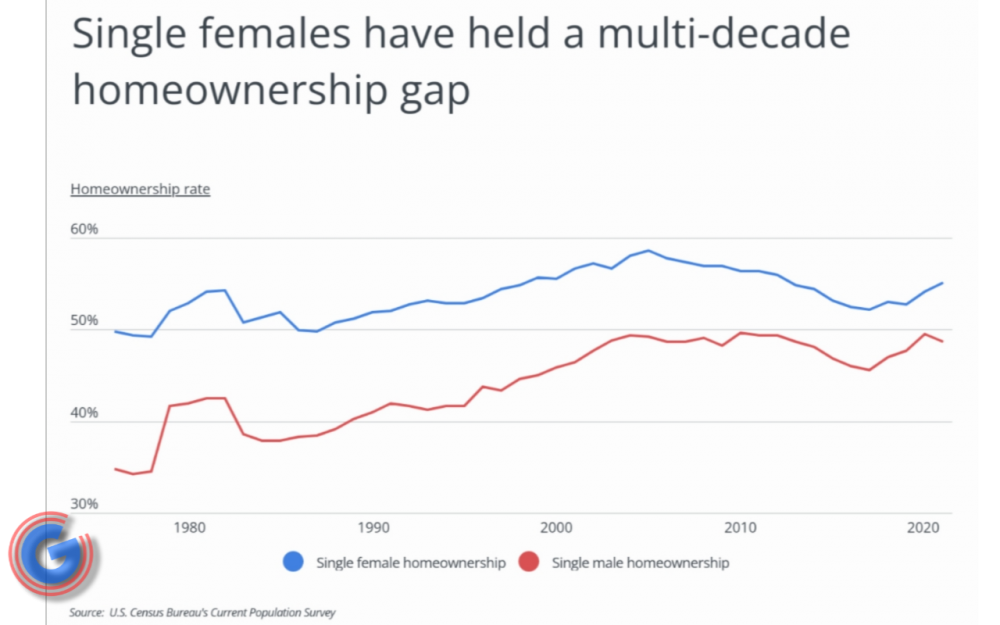 Homeownership is a common goal for millions of Americans, but a number of social and economic factors can affect peoples’ ability to reach that milestone. From income to educational attainment to racial and ethnic background, there are significant gaps in homeownership rates between different demographic groups in the U.S. And family structure and gender are no different.

In Tennessee, a recent analysis found the homeownership rate among single females is 56.85%, compared to 50.29% for single men. That number is almost 3-percentage points higher than the national average of 54.04%.

MORE ON HOMEOWNERSHIP - Women attain these higher rates of homeownership despite being on the unfavorable end of a different gender gap in compensation. Women in the U.S. earn around $0.84 for every $1 earned by men in the U.S. Like the homeownership gap, the gender compensation gap has closed slightly over time, but many women still face a number of factors that limit their earnings. These include differences in jobs and industries worked across genders, loss of time and experience in the workforce due to motherhood or other caretaking responsibilities, and the effects of bias and discrimination on women’s wages and working conditions.

In light of this financial disadvantage, women are more likely than men to make sacrifices when saving for a home. A recent study from the National Association of Realtors found that single women buyers were more likely to report cutting back on spending for non-essential goods, entertainment, clothes, and travel, which emphasizes how important homeownership is to them. Additionally, women have been found to be more risk averse, and housing is widely considered to be a “safe” investment according to research produced by Fannie Mae.

Despite having lower wages, women homeowners are not necessarily making tradeoffs in the types of homes they purchase. According to the Census Bureau’s 2020 American Community Survey, the median self-reported home value for single female households and single male households is the same at $175,000. Married couple households, however, tend to own homes valued substantially higher than singles of either gender, with a median home value of $250,000.

At the local level, cities in the South and Southwest also make up the bulk of the locations with the largest gender homeownership gap. California also places three cities in the top 15 largest gaps, including the nation-leading San Jose area, where the gap between male and female homeownership is nearly 11 percentage points.

For more information, a detailed methodology, and complete results, you can find the original report on Porch’s website: https://porch.com/advice/cities-with-largest-gender-homeownership-gaps.