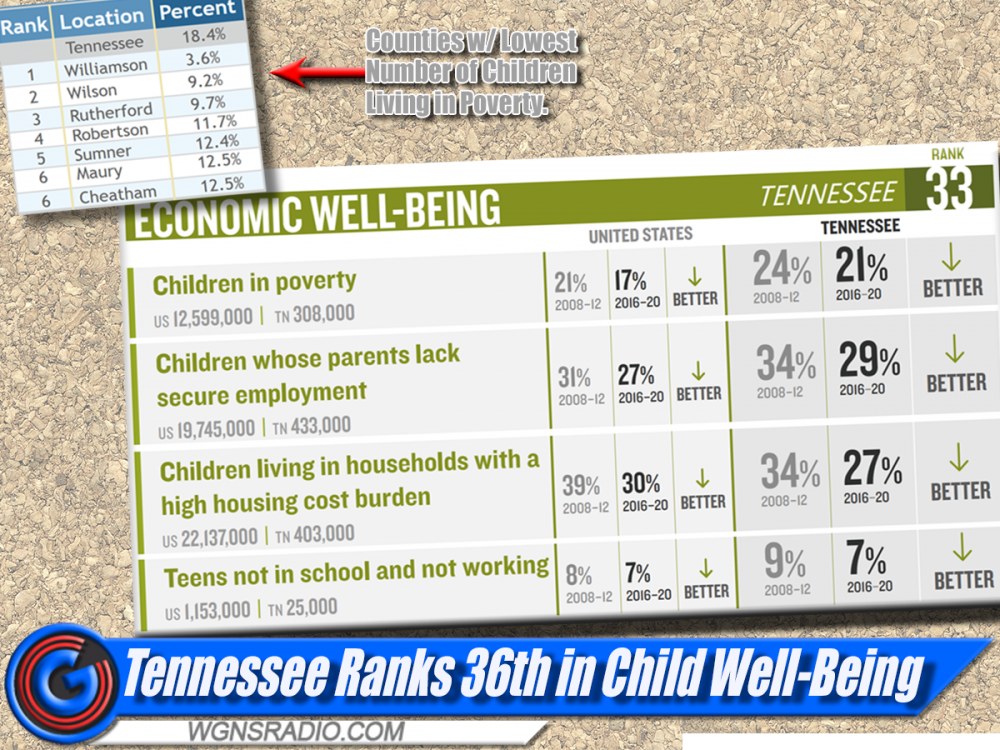 Newly released data show Tennessee ranks 36th in overall child well-being, according to the 2022 KIDS COUNT® Data Book, a 50-state report of recent household data developed by the Annie E. Casey Foundation analyzing how children and families are faring. However, children in America are in the midst of a mental health crisis, struggling with anxiety and depression at unprecedented levels. This year, the annual report focused on youth mental health, concurring with a recent assessment by the U.S. surgeon general that conditions amount to a youth mental health pandemic.

Wilson County came in at number 2 on the list with only (point).5 percentage points lower than Rutherford County. Wilson County had a rating of 9.2%.  Williamson County hit the number 1 position with only 3.6% of children living in poverty.

On the opposite end of the spectrum, Lake County had the highest number of children living in poverty. Lake was ranked at number 95, out of all 95-counties in the state with 40% of children living in poverty. Tiptonville, the county seat of Lake County, sits about 3-hours and 30-minutes west of Rutherford County. They have a population of 7,273-residents.

WORKING TEENS - Teenagers holding down a job often helps to establish a higher level of maturity and many parents like for their teens to take on that responsibility. But the study shows that at least 6% of teens between the ages of 16 and 19 are not working AND not attending school, which is a big problem. The good news is that the percentage is going down. In 2010, as many as 10% of teens were not working and not attending school.

HOUSING –Renting a home verses owning a home can also make a difference in the lives of children, especially if the monthly costs of owning a home is cheaper than renting - - that is ‘if’ parents don’t buy a home that is too expensive for their budget, housing, the latest information gathered in the Kids Count Survey shows that 62% of children live in a home that is owned, as opposed to leased.

FAIR MARKET RENT - In looking at fair market rent prices throughout the state, Claiborne County had the lowest in Tennessee at $825 per month. To reach that number, analyst looked at rent prices for three-bedroom housing, while determining the eligibility of rental housing units under the Section 8 Housing Assistance Payments Program.  The highest rent prices in the study included Rutherford and 9-other counties, all at $1,539 per month.

The report sheds light on the health, economic and other challenges affecting American children as well as how those challenges are more likely to affect children of color.

Despite its low rankings nationally, Tennessee has seen a slight improvement in overall child well-being and has seen ranking improvements in some areas. As the pandemic ebbs, it is critical that Tennessee strengthen support for children to ensure positive trends continue. Tennessee’s strongest ranking is in Education, where the state ranks in the median at 25th While national advances have occurred in education, Tennessee has clearly improved more than average. Recently released 2022 Tennessee Comprehensive Assessment Program (TCAP) results indicate Tennessee continues to move in the right direction.

“The Data Book shows simply returning to a pre-pandemic level of support for children and families would shortchange millions of kids and fail to address persistent geographic, racial and ethnic disparities,” said Richard Kennedy, executive director of Tennessee Commission on Children and Youth, Tennessee’s member of the KIDS COUNT network.

The Data Book reports that children across America, and in more than 40 states and the District of Columbia, were more likely to encounter anxiety or depression during the first year of the COVID-19 crisis than previously, with the national figure jumping 26%, from 9.4% of children ages 3-17 (5.8 million kids) to 11.8% (7.3 million) between 2016 and 2020, the year COVID-19 swept across the United States. This increase represents 1.5 million more children who are struggling to make it through the day. Data show nearly one in 10 Tennessee children are diagnosed with anxiety or depression, and we are trending in the wrong direction. Tennessee has the opportunity to expand support to help the one in 10 children across the state who are struggling with anxiety or depression get the appropriate care they need.

Racial and ethnic disparities contribute to disproportionately troubling mental health and wellness conditions among children of color. Nine percent of high schoolers overall but 12% of Black students, 13% of students of two or more races and 26% of American Indian or Native Alaskan high schoolers attempted suicide in the year previous to the most recent federal survey. Further, many LGBTQ young people are encountering challenges as they seek mental health support. Among heterosexual high school students of all races and ethnicities, 6% attempted suicide; the share was 23% for gay, lesbian or bisexual students.

Each year, the Data Book presents national and state data from 16 indicators in four domains — economic well-being, education, health, and family and community factors — and ranks the states according to how children are faring overall. The data in this year’s report are a mix of pre-pandemic and more recent figures and are the latest available.

“Mental health is just as important as physical health in a child’s ability to thrive,” said Lisa Hamilton, president and CEO of the Annie E. Casey Foundation. “As our nation continues to navigate the fallout from the COVID crisis, policymakers must do more to ensure all kids have access to the care and support they need to cope and live full lives.”

The Casey Foundation calls for lawmakers to heed the surgeon general’s warning and respond by developing programs and policies to ease mental health burdens on children and their families. They urge policymakers to: