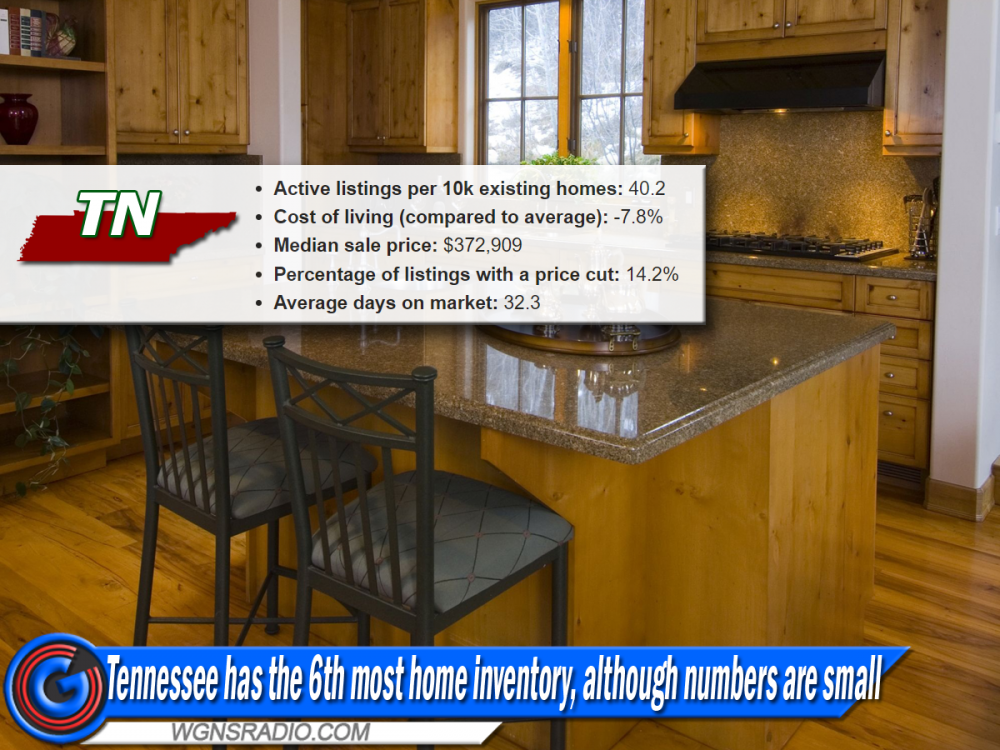 The real estate market has shown encouraging signs for buyers in recent months. A recent analysis found that in Tennessee—where the cost of living is 7.8% below the national average—has 40.2 active listings for every 10,000 existing homes. Out of all affordable U.S. states, Tennessee has the 6th largest home inventory, although the current numbers are not that large. Homes are now spending more time on the market, and sellers are more inclined to lower prices. And buyers are walking away from deals more often, which suggests that they are regaining negotiating power after an extremely seller-friendly stretch.

As for new homes in Murfreesboro, Mayor Shane McFarland said the City Council is seeing fewer and fewer builders request permits to build new neighborhoods, which means there is a lack of land to build new subdivisions…Now, the cost of a new home in the 'Boro is $500-thousand or more…

Home affordability remains a major challenge, especially for first-time homebuyers. Mortgage interest rates have increased dramatically since the start of 2022, adding hundreds of dollars to prospective borrowers’ monthly mortgage payments. Persistently high inflation over the last year is eating into household budgets, leaving less money available to put toward a home purchase. And inflation has also raised the cost of homes, as high demand and low supply have driven prices to record levels.

Declining inventory and rising prices nationwide have been exacerbated in the last two years, but the market has been experiencing these trends for most of the last decade. Monthly active real estate listings regularly topped 2 million during the busy season from 2012 until 2015 but began to fall off in subsequent years. Listings have not exceeded 1.5 million since late 2019 and last topped 1 million in November 2020. Meanwhile, median sales prices have more than doubled over the last decade, including a 50% increase from the beginning of 2020 to now.

The affordability crunch now means that many expensive locations have more inventory available because buyers have been priced out of their markets. Hawaii is among the nation’s most expensive states, especially for housing, and also currently leads the U.S. with 69.1 active real estate listings per 10,000 existing homes. Other high-cost locations like New Jersey and Connecticut also rank highly for available inventory. In contrast, low-cost states including New Mexico, West Virginia, and Kansas have fewer than 10 active listings for sale per 10,000 homes.

Despite the challenges of the current real estate market, shoppers looking for locations that are both affordable and have adequate inventory do have some options available. South Carolina, Nevada, and Arizona all have below-average cost of living, but rank in the top 10 for active listings per 10,000 existing homes. And at the metro level, cities in these states–such as Myrtle Beach, Las Vegas, and Tucson, respectively–are among the best for homebuyers seeking available inventory and affordable living.

The data used in this analysis is from Redfin’s Data Center, the U.S. Bureau of Economic Analysis’ Regional Price Parities, and the U.S. Census Bureau’s 2020 American Community Survey. To determine the affordable states with the most home inventory, researchers at Stessa calculated the number of active listings per 10,000 existing homes among locations with a cost of living below the national average. The number of active listings reflects the total number of active listings on the last day of each month, averaged over the first five months of 2022. In the event of a tie, the state with the lower cost of living was ranked higher. Only locations with complete monthly data for 2022 were considered in this analysis.

The analysis found that in Tennessee—where the cost of living is 7.8% below the national average—there are 40.2 active listings for every 10,000 existing homes. Out of all affordable U.S. states, Tennessee has the 6th most home inventory. Here is a summary of the data for Tennessee:

For more information, a detailed methodology, and complete results, you can find the original report on Stessa’s website: https://www.stessa.com/blog/affordable-cities-with-most-home-inventory/