Return of the Campus School chickens! 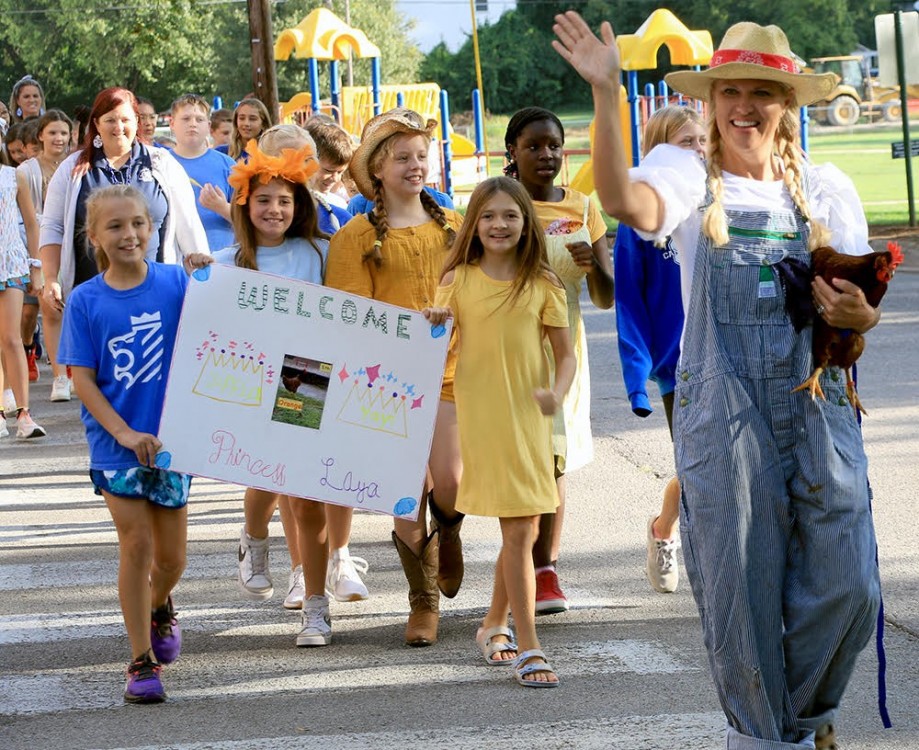 Outside of Homer Pittard Campus School Friday morning, there was a scene some might call strange.

It started with a marching group of proud kindergarteners, followed by first grade, second grade and so on. Some wore hats that looked like chickens, others displayed handmade posters featuring chickens, and all carried huge smiles.

A teacher or parent volunteer with each group confidently carried an actual hen, while other parents lined the road in front of the school, cheering for their children and taking pictures. The event was dubbed the “Campus School Chicken Parade,” and it was meant to celebrate the return of one of the students’ favorite enrichment programs.

The chicken project has been a staple of Campus School for many years. During the height of the COVID-19 pandemic, however, the program had to be discontinued and the original chickens were adopted out. But thanks to the efforts of many, the program has returned to the delight of everyone.

The chickens live in a coop on the kindergarten playground at the school, and in addition to playing and petting them, the students eventually will be in charge of their care and maintenance.

“Right now, I supervise them in making sure the chickens have fresh food and water every day, and egg collection,”said kindergarten teacher Melissa Flowers, who has spearheaded the program for years along with her fellow teachers. “They also box the eggs in the cartons for our True Blue Celebration giveaways. Eventually, the kiddos will take the lead in the care for the chickens.”

The school’s Parent Teacher Club was “instrumental” in making the original project a reality, and they funded the cost of the original flock and the building of the coop, Flowers said. The PTC then helped support the restart of the project, by funding an addition to the coop and needed supplies. But everyone chipped in.

School Resource Officer Kerry Nelson made repairs to the coop, and a former Campus School family assisted with construction on an addition. Flowers worked with Windy Willette, the small animal science teacher at Blackman High, last spring to secure some new chicks that were of a gentle, friendly breed.

Each class has adopted one hen and chose a name. The chickens are Bubbles, Marshmallow, Dolly, Nugget, Pepper, and last but not least, Princess Laya.

To sustain the project, the school is soliciting donations for food and supplies, and parents have signed up to maintain the project over holidays and weekends.

“The Animal Science program at MTSU is always helpful and now we have the BHS animal science program on board as well,” Flowers said. “It has really been a community effort.”

The school building is owned by Middle Tennessee State University, and the academic program is a partnership between the school district and the university. The school serves as a laboratory school for the university, and education majors work alongside Campus School teachers to hone their classroom skills and provide additional resources for students.

The school prides itself on cultivating relationships and providing experiences for students, said Principal Dr. Sherry King. The chicken project is an example of those opportunities.

“It’s unique in the way the community comes together, it’s such a special thing,” King said. “They all care for the chickens, and the kids have those hands-on experiences with the chickens. It’s just like part of a big family. It becomes part of the culture of the school, King and Flowers said, adding students become very attached to the chickens in addition to simply caring for them. In fact, it’s not unusual to see students headed down a slide or riding a tricycle while holding the chickens.

“The children adore the chickens,” Flowers said. “They really become a part of class and school community. They are like our pets. It's really sweet to see how much the children love them.”