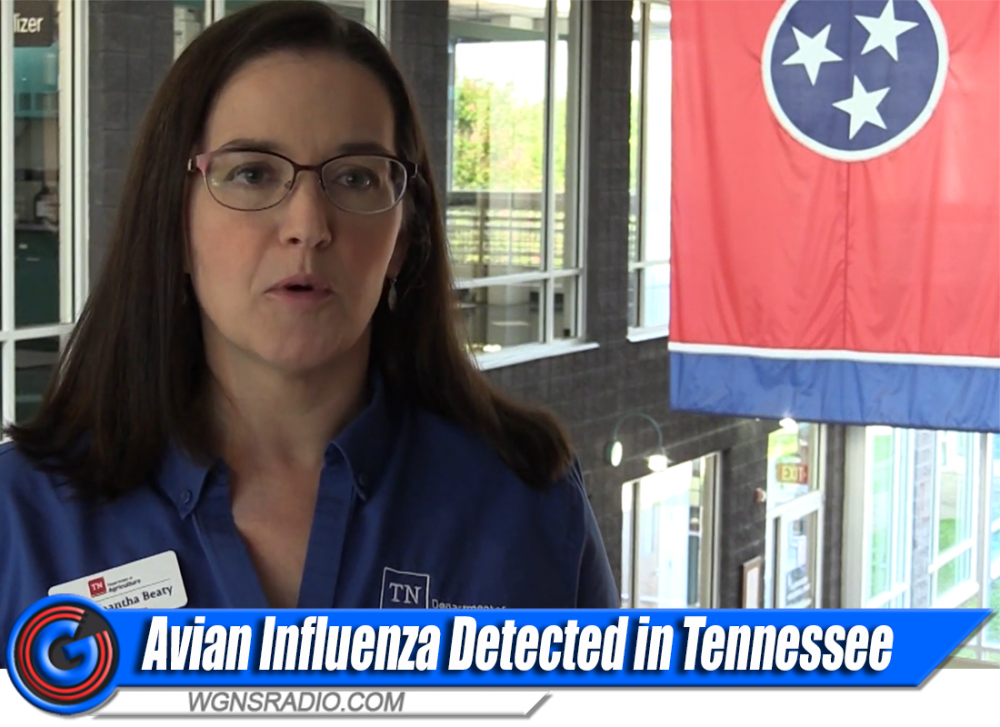 Scroll down to hear from Dr. Samantha Beaty

TENNESSEE - A strain of highly pathogenic avian influenza (HPAI) has sickened a poultry flock in West Tennessee. To protect the health of other domesticated birds, the State Veterinarian is leading the emergency response and ordering an immediate halt to poultry shows, exhibitions, and sales statewide.

HPAI is known to be deadly for domesticated fowl. The affected backyard flock in Obion County consists of chickens, turkeys, ducks, geese, pheasants, and pigeons. On Sept. 13, the flock owner notified the State Veterinarian’s office after a sudden unexplained increase in deaths. Testing at the C.E. Kord Animal Health Diagnostic Laboratory in Nashville and the National Veterinary Services Laboratory in Ames, Iowa confirmed the presence of H5N1 highly pathogenic avian influenza in samples from that flock. For more details, see the below video and hear Dr. Samantha Beaty explain more about avian influenza.

“With HPAI, it’s critical we move quickly to stop the virus from spreading,” Tennessee State Veterinarian Dr. Samantha Beaty said. “We appreciate the flock owner for contacting us immediately when unexpected deaths occurred. We have protocols in place for instances like this and we are working closely with our state and federal partners to get this situation under control.”

For now, any events where poultry can comingle are prohibited. That includes poultry shows, exhibitions, livestock sales, flea markets, and swap meets.

“Issuing an order like this is never an easy decision, especially during fair season,” Agriculture Commissioner Charlie Hatcher, D.V.M. said. “From backyard flock owners to the large commercial companies—the poultry industry touches a lot of lives in Tennessee. This is an effort to protect all domesticated poultry in our state.”

The affected farm is under quarantine and the flock is being depopulated to stop potential spread of the illness. Animal health officials have established a 20 kilometer (12.4 mile) surveillance zone surrounding the site. Within the zone, other flocks will be tested and monitored for illness and poultry movement is restricted. That zone includes a portion of Kentucky. The Tennessee Department of Agriculture is partnering with the Kentucky Department of Agriculture to coordinate response.

“We are working diligently alongside our Tennessee counterparts to prevent this virus from spreading to other poultry premises,” Kentucky State Veterinarian Dr. Katie Flynn said. “Because the control area comes into Kentucky, we have initiated our avian influenza response and are in active communication with state, federal, and industry partners. We will begin surveillance of commercial and backyard flocks within that identified area immediately.”

Although HPAI does not pose a food safety risk, no infected poultry will be allowed to enter the food supply. Poultry and eggs are safe to eat when handled and cooked properly. The risk of human infection with avian influenza during poultry outbreaks is very low. In fact, no transmission to humans was reported during the outbreak that affected commercial poultry farms in Tennessee in 2017.

Owners of backyard and commercial poultry flocks are encouraged to:

Information about Tennessee’s response to avian influenza and resources can be found online at www.tn.gov/agriculture/businesses/animals/animal-health/avian-influenza.html.

Information about Kentucky's response can be found online at www.kyagr.com/HPAI.

State officials and partners have extensive experience in effectively containing the virus. Control of avian influenza includes coordination of resources and response, and protocols for quarantine, testing, disposal, cleaning, disinfection, and monitoring.

In Tennessee, more than 600 family farms contribute to the commercial poultry industry. The state is a global leader for primary breeders, and an estimated 45 percent of the chicken consumed worldwide traces back to Tennessee operations. Broiler chickens are among the state's top agricultural commodities, generating $376.2 million in cash receipts in 2021.