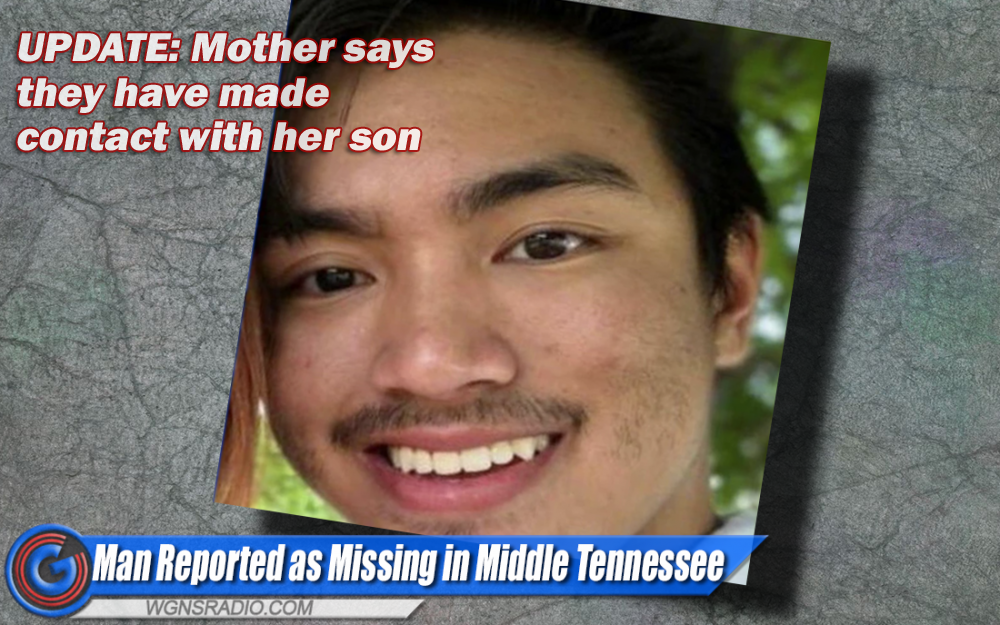 UPDATE: Mother says they have made contact with her son.

UPDATE: The mother who reported that her son was missing says they have since made contact with her son. Details of what occured have not yet been released. WGNS will keep you informed.

PREVIOUS REPORT - (MIDDLE TENNESSEE) A missing Middle Tennessee man who has not been seen since Tuesday, October 4th, worked just over the Rutherford County line in Antioch. 29-Year-old Blayne Nguyen (last name is pronounced Win) is employed by Asurion near the interchange of I-24 and Hickory Hollow Parkway. After learning about his disappearance, WGNS spoke to Nguyen’s mother Miza Dorris. According to Dorris, a neighbors camera recorded what appeared to be at least two men attacking her son outside of his Sumner County condo on October 4th… Once on the scene, authorities were reportedly told there was a domestic dispute at the condo and Nguyen had fled the scene. Reports indicate the girlfriend told officers she wanted to file charges against Nguyen.
ADVERTISEMENT

Nguyen’s mother found out about the alleged attack on her son this past Sunday (10/09/22), 5-days after police were initially called. As soon as Nguyen’s mother learned more details about the incident, she called detectives… Nguyen’s mother told WGNS that her son’s cellphone, keys and his car were still at her sons condo… The mother went on to state that police were not allowed to go inside the home to look for Nguyen until Monday (10/10/22)…

As of Monday night at 11PM, 29-year-old Blayne Nguyen is still missing…His mother said she spent the entire day putting up flyers in hopes of someone coming forward with more details about the disappearance of her son.

Anyone with information on Nguyen’s whereabouts should contact the Hendersonville Police Department at 615-822-1111. You can also notify his mother at 615-613-3258.