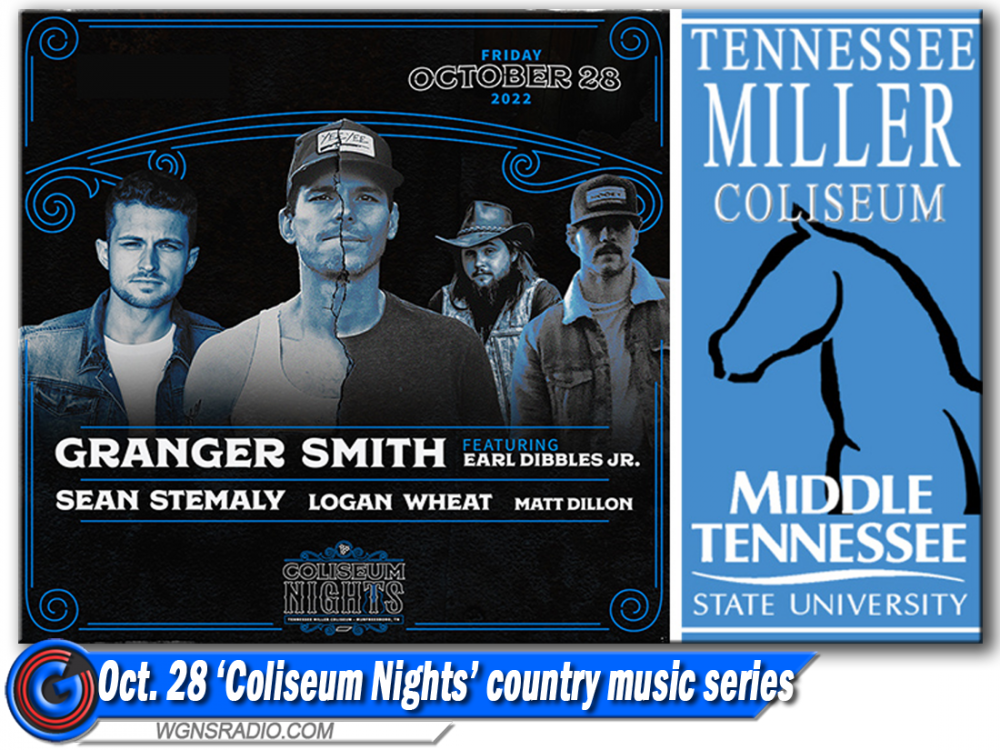 (MURFREESBORO)  As Murphy Center celebrates it golden anniversary along with memories of the world's top artists performing there, the question arises about a similar future for the Tennessee Coliseum. That's MTSU's well-used horse coliseum on West Thompson Lane. Known for its popular horse shows, ag-related events and dirt-based arena floor, MTSU’s Tennessee Miller Coliseum on Thompson Lane is galloping into a new frontier of live music events by serving as host venue for the inaugural Coliseum Nights country music concert series.

Gates open at 6 p.m. Friday, and tickets are on sale now at www.coliseumnights.com. The coliseum is located at 304 W. Thompson Lane.

“We are beyond excited to be bringing this new country music concert series to Murfreesboro and the Middle Tennessee area,” said Jonny Hill, founder and executive producer of Coliseum Nights. Hill, who developed the series with co-founder and MTSU alumnus Henry Feldhaus, has been a part of the country music scene and events in Tennessee for over seven years, notably as the founder and owner of Lynchburg Music Fest in Moore County, home of the Jack Daniels Distillery. “This will be the first show in the series for Coliseum Nights with many more to follow at the Tennessee Miller Coliseum. We are grateful and proud to be in the partnership with this venue, showcasing these artists and everything Middle Tennessee has to offer,” Hill said.

Darrell Towe, director of Tennessee Miller Coliseum, said the 5,000-seat venue is well-equipped to logistically handle such a concert series — adequate parking, easy access off Thompson Lane — and can schedule such events around the slower periods of its bread-and-butter horse show season.

And while a dirt floor isn’t typical for a concert, Towe said country artists tend to “be very grounded” in the rural American experience and embrace Miller’s unique features. He said a few other promoters have reached out to inquire about the facility.

“After we compact the floor, our place kind of resembles any arena-type venue that you might run across. The show will very much resemble something that you might see in Murphy Center once the stage is set, the LED walls are up, and the speakers are put in place,” Towe said. “The average person in attendance won't even realize we have a dirt floor, because in the dim lights walking out onto the floor, it feels very solid. It feels very similar to asphalt.”

And while Miller Coliseum has hosted some events with musical components, Towe believes Coliseum Nights will mark the first ticketed musical event at the venue.

Student, community involvement - In the spirit of education and hands-on learning, Coliseum Nights is offering an opportunity for all MTSU student organizations to get involved in promoting the event while earning money to support their co-curricular clubs.

Feldhaus, a five-year veteran of the music scene as well as a long-time employee of Jack Daniels Distillery, is an alumnus of the MTSU School of Agriculture where he obtained his undergraduate as well as his graduate degree.

“Being part of the MTSU family, it just felt right to bring this event to the area and include my alma mater,” he said. “After having spent over a decade of my life at this campus and attending countless events at the Tennessee Miller Coliseum, I would have never dreamed of being part of such a momentous event that gives back to the community, campus and student body. It’s a surreal experience.”