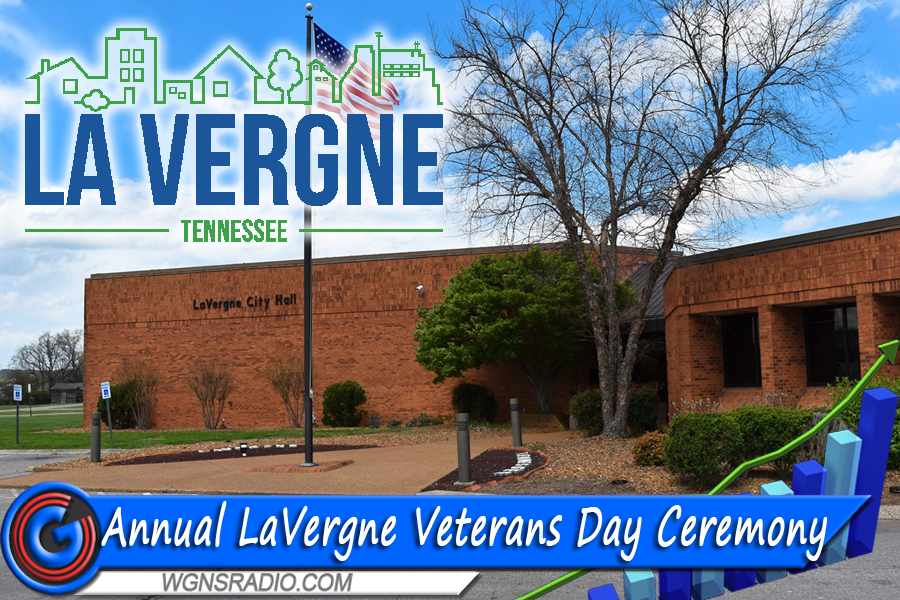 (La Vergne, Tenn.) The annual La Vergne Veterans Day Ceremony is scheduled for November 11th at 11 a.m. at Veterans Memorial Park, located at 115 Floyd Mayfield Drive. This year’s speakers include Tabatha Howard, Ross Howard, and Randy Berg. There will also be a 21 gun salute and taps will be played.

The parks department is also offering two ways for families and friends to honor their loved ones who have served in the armed forces.

Freedom Field Flags - The parks department will be offering commemorative American flags that can be purchased for $10.00. The flags will be on display in our Freedom Field and will also be marked with the honored veteran's information. Anyone interested should contact Parks and Recreation at (615) 793-3224 or stop by 294 Sand Hill Road for more details. Forms can also be filled out online.

Veterans Memorial Wall Bricks - The City of La Vergne also still has space on its memorial wall to honor family, friends, neighbors, and colleagues who have served in the U.S. armed forces. The wall is a permanent commemorative display that is lined with bricks engraved with the names of honored men and women who have served our great country. If you have questions, contact the Parks and Recreation Department at 615-793-3224.

About Tabatha Howard - Tabatha was born and raised in Felton, DE along with her six siblings. She joined the Air Force in 2009 where she first served in a special duty assignment in Washington D.C. as a Presidential Ceremonial Guardsman. Halfway through her enlistment, she cross-trained into physical therapy where she was then stationed at Columbus AFB, MS until she got out in 2015 and she married her husband and moved to Louisiana. Just before getting out of the Air Force, Howard finished her physical therapist assistant degree. She, her husband, and 3 boys moved to La Vergne in 2017. In 2019, she and her husband opened a massage business, Fresh Start Massage Therapy, in Smyrna and in 2020 she finished her bachelors of science in sports and health sciences.

About Ross Howard - Ross was born and raised in Henderson, TX. He joined the Army in 2008 as a combat medic and was first stationed at Fort Bliss, TX. He served one tour in Iraq, supporting Operation Iraqi Freedom. Halfway through his enlistment, he cross-trained into physical therapy where he was then stationed at Fort Polk, LA. After 9.5 years of active duty service, he moved to La Vergne to plant roots. He and his wife and three boys have lived in La Vergne since 2017. In 2019, Ross and his wife opened a massage business, Fresh Start Massage Therapy, in Smyrna.

About Randy Berg - Pastor Randy grew up in a military family of six, the oldest of four children. During his high school years, he led a number of rock bands as a lead guitarist in the southeast United States. Later, during his six year tour of duty as guitarist/vocalist for the U.S. Navy Band, the Lord called him to use his talents for ministry. Upon his honorable discharge, he began scheduling engagements as a "musicianary" humorist and songwriter. After earning a bachelor of biblical studies, he became a licensed minister and received an endorsement from the Tennessee District of the Assemblies of God to launch a missions church in La Vergne, Tennessee. Several years later, he received his ordination. In the context of God's vision for Grace Church Worship and Community Center, the pastor especially enjoys focusing on worship music, songwriting, improvisation, messages, and men's ministry. Pastor Randy is blessed in life and ministry by his lovely wife Jackie and two wonderful daughters, Melissa and Melody.