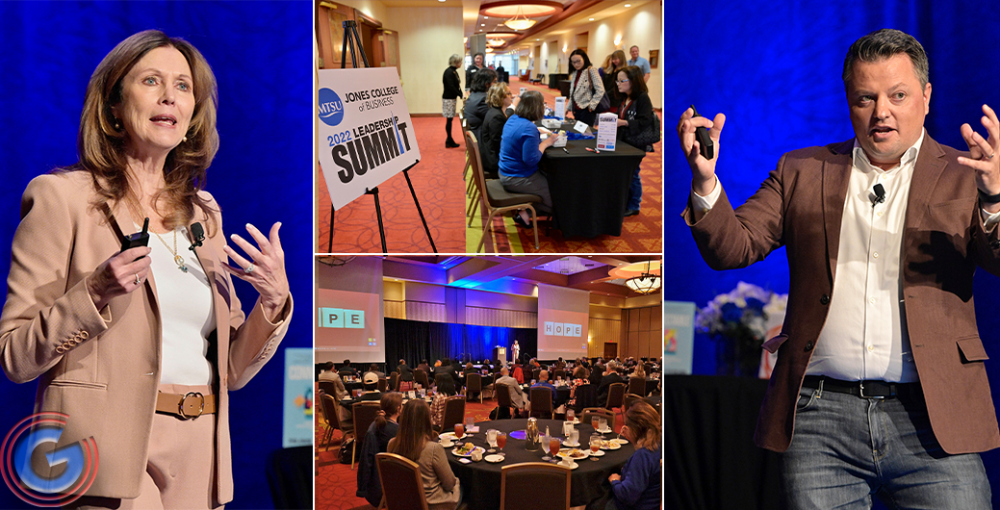 MURFREESBORO, Tenn. — Author Ryan Jenkins began his keynote remarks for Middle Tennessee State University’s recent Leadership Summit at Embassy Suites with the story of the tiny hamlet of Kugluktuk in western Canada that at one point had the world’s highest teen suicide rate despite a population of just under 1,500 people.

In response to the crisis, the community introduced the sport of lacrosse to the local high school, he said, and the team, the Kugluktuk Grizzlies, eventually makes it to the championships in Toronto. But it was the camaraderie and relationships built between players and community through the practices and games over the years that had such a dramatic impact.

“Once they introduced the game of lacrosse and the sense of belonging and connection to a group, that highest teen suicide rate fell to … zero,” Jenkins told the crowd. “This is the power of connection and the perfect backdrop for our conversation today. Much like the people of Kugluktuk, your teams are facing that same invisible threat.”

That invisible threat is “isolation and loneliness,” which leads team members within a workplace to be much more likely to disengage, miss work and underperform, he said. His focus was showing those in attendance “how belonging and connection can unlock your team’s fullest potential.”

MTSU’s 2022 Leadership Summit: Innovative Leadership, hosted again by the Jennings A. Jones College of Business, returned this year to Embassy Suites in Murfreesboro on Oct. 28 after not being held since 2019 because of the pandemic.

As a part of his presentation, Jenkins, who was joined by executive leadership coach and guest speaker Libby Gill in sharing insights on personal and professional development, did a series of live polls with the audience through their smartphones about the loneliness and fears that many people may feel on the job.

A Wall Street Journal bestselling author, internationally recognized keynote speaker and virtual trainer, Jenkins has spent the past decade helping organizations optimize generational dynamics, lessen worker loneliness, and prepare for the future of work. His latest book is “Connectable: How Leaders Can Move Teams from Isolated to All In.”

“Human connection is vital … yet you and I continue to pull away from each other,” said Jenkins, who has worked the past two years with a team conducting workplace surveys and studying connections at work. “Connection is now the most valuable workplace currency. And I believe human connection is the future of work. It’s the one thing that technology can’t replace.”

Jenkins said research shows that when employees have a strong sense of connection on the job, companies see improvements in recruitment, engagement and retention. A key part of that deep connection is for employees to feel safe on the job and believe that they have an opportunity to be seen and heard, he added.

Before Jenkins’ presentation, Gill shared the science-based concepts of “hope theory.” Author of six books, including the award-winning “You Unstuck,” Gill guides others to: reframe change as an opportunity for massive growth, re-energize top talent to reach their full potential, and re-inspire company culture with a hope-driven vision of the future.

“Hope can be an underpinning of innovation and leadership because it focuses you on the future,” she told the audience. “As we know, the work world has changed. The pandemic has changed everything forever. Everybody that comes back to work in whatever form your workplace is … he or she has changed as an individual. That’s a lot of that innovation.”

Technology obviously has played a huge role in the new workplace, she said, adding that “everybody needs to be literate to some degree in technology, even if you’re completely human centric in your leadership or in your organization.”

Yet Gill, as Jenkins also reinforced during his presentation, pointed out that Generational Z workers crave an in-person workplace experience, particularly after battling their way through the isolated days and months required during the onset of the COVID-19 pandemic.

Nevertheless, skilled workers now expect options for hybrid work, she added, and that “hybrid and remote models are here to stay” as employees look to regain the valuable time lost in grueling daily commutes doing jobs that can be just as effectively done from home.

“Hope theory is about having a future-focused vision and an understanding of the challenges on the way to getting there,” she said. “It’s this very balanced sense of setting this lofty vision, knowing you can change, but understanding that there are going to be bumps along the way.”

Gill said that “high hope people” tend to have things in common such as they set more goals, set more ambitious goals, have more success reaching goals and have greater satisfaction and less stress. She reminded the audience that “intelligence and talent aren’t fixed” and that effort and attitude can grow both talent and skills.

In opening remarks, David Urban, dean of the Jones College of Business, touted the summit as an opportunity that “allows us to examine the attitudes and behaviors that characterize successful, innovative leaders and entrepreneurs,” while also noting that 80% of Jones College’s 30,000 alumni live in Tennessee.

“No collegiate business college has had a more significant impact on the economic development of this region than MTSU’s Jones College of Business,” Urban said. “In short, our goals have been, and still are, national prominence and regional dominance.”