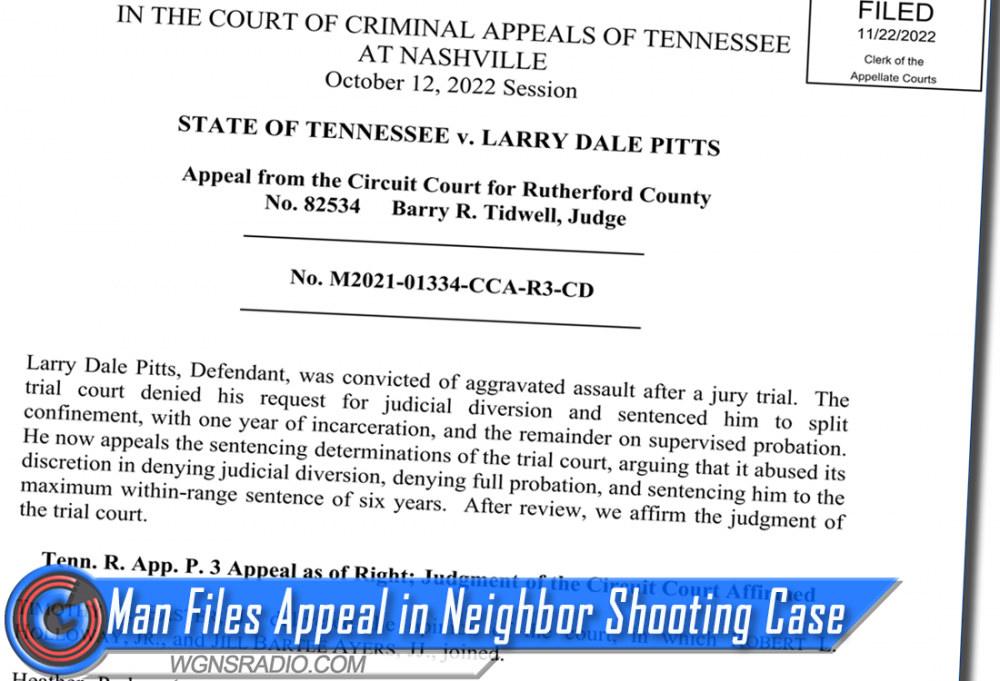 A man convicted in a Rutherford County jury trial on a charge of aggravated assault has filed for an appeal in his sentencing – after the trial court denied a judicial diversion.

Larry Dale Pitts suggested the trial court abused its discretion in denying judicial diversion, denying full probation, and sentencing him to the maximum within-range sentence of six years. The 60-year-old's sentence will end in 2027.

The judicial diversion Pitts asked for typically allows for the qualified defendant to enter a conditional plea of guilty with the understanding that after the defendant successfully completes probation, the diverted charge is dismissed and can be expunged from the defendant's record.

Neighbor Shot in Leg - The charge that led Pitts to court was for attempted first degree murder. A Rutherford County grand jury also indicted the defendant for employing a handgun during the commission of a dangerous felony. According to court documents, the indictment came after the defendant allegedly shot his next-door neighbor in the leg on July 16, 2019. The matter proceeded to a jury trial.

The man who was shot had to be transported to Vanderbilt Medical Center, where he underwent 10-hours of surgery on his leg. At the conclusion of the trial, the Rutherford County Circuit Court jury convicted Defendant of the lesser-included offense, aggravated assault, and acquitted him of employing a handgun during the commission of a dangerous felony.

For the State of Tennessee, Judge Timothy L. Easter affirmed the judgement of the trial court.