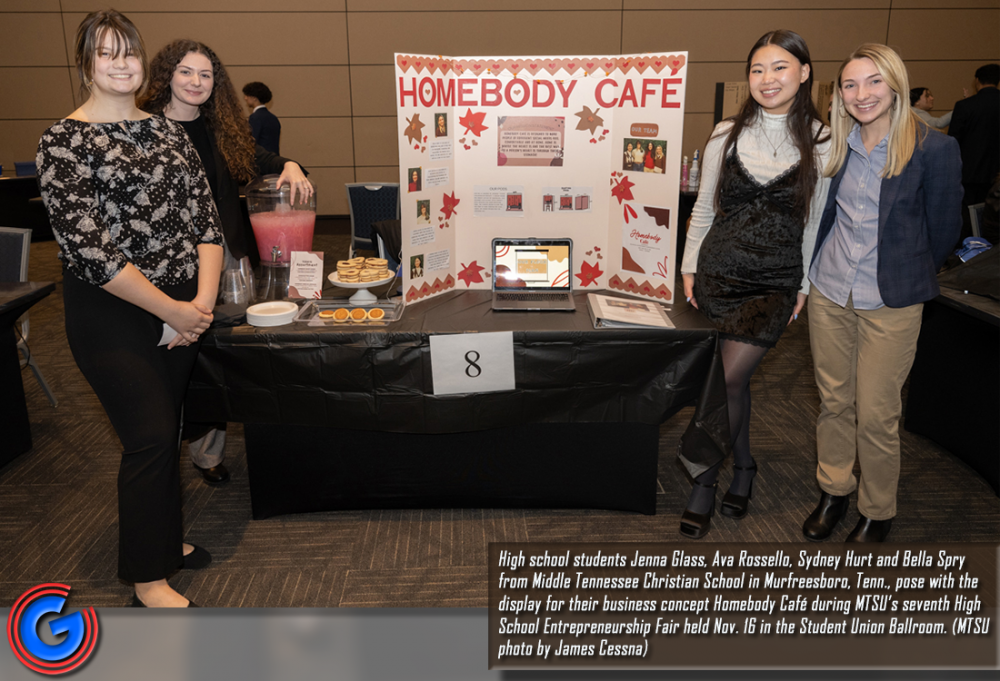 “We are an online engineering company that specializes in producing engineering designs for independent engineers,” Petelle said. “We provide online design tutorials, a space for you to upload and to have your design voted on, and a shop for those designs to be bought by our community.”

The two aspiring entrepreneurs were among more than 100 high school students representing 52 teams and 10 high schools in the Midstate area for Middle Tennessee State University’s seventh High School Entrepreneurship Fair, resuming Nov. 16 for the first time since 2019 following a pause because of the pandemic.

Hosted by the Department of Management and Pam Wright Chair of Entrepreneurship in the Jones College of Business, the fair was part of MTSU’s Global Entrepreneurship Week activities that also included a family business panel and guest speaker.

Nine judges made up of MTSU faculty and area business leaders chose first- through fifth-place winners and gave out several special awards for categories such as best written plan, best elevator pitch and others. Each award came with a plaque and a voucher ranging from $50 to $100 for students to use for purchasing MTSU-branded items in the MTSU Phillips Bookstore on the first floor of the Student Union Building.

Fair ‘elevates’ students - As he scanned the bustling ballroom as students explained their business ideas to judges, MTSU management professor Joshua Aaron, holder of the Pam Wright Chair of Entrepreneurship, said was impressed with the budding entrepreneurs, some of whom he’ll likely one day teach.

“The students have done a great job. There are some great displays,” said Aaron. “Some of the students I know from being involved in the Williamson County entrepreneurship center, and I’ve seen some of (the students) there, so I knew what to expect as far as the level of sophistication that I would see today, and I haven’t been disappointed.

Higgs said he and Petelle first started with a social media survey to help define their target market of young adults and teens. They then developed a website that allows users to review their services. Petelle, who is taking engineering-related courses at Central, hopes to eventually get his master’s degree in engineering, while Higgs has interest in pursuing a career in business. They combined their individual interests to work on a business concept that took them about three months to crystallize.

The duo took home the Engineering Enterprise Award and a $50 voucher.

Dressed in suit and tie, Nathan Carney, a sophomore at Holloway High School in Murfreesboro, explained the concept behind his storytelling business called Monster Universe, which developed from his love of anime and comics. His company’s motto is “Bringing out the monster inside of you.”

“Monster University is a company that creates hero stories, villain stories, anti-hero stories, and makes it different every single time,” said Carney, adding that a business degree is likely in his future. “I’m trying to provide (customers) with new stories that don’t really copy or relate to other stories. … This is kind of what I want to do.”

Clark said she and Narrell also developed a survey that was sent to student athletes to learn their preferences for the types of photos they preferred, with a clear majority preferring images that were “simpler” without all the artistic bells and whistles that some similar businesses use to market their services.

Clark plays on Central’s softball team while Narrell serves as team photographer, so their collaboration fit nicely. “But we really wanted to spread the offering of these types of photos to more students at different high schools, different colleges,” Clark said.

Narrell said the entrepreneurship fair is a great idea because it not only allows students to pitch their business ideas, but that it also allows participating students to see all the other ideas from other teams and learn from each other. Focus Photography was the fifth place winner at the fair.

“I really have liked seeing all of the other things that students have thought of … and everyone’s different takes on them,” said Narrell, who plans to attend MTSU to study photography and education.

Added Clark: “I’m hoping to go into a career in business, so seeing all of these students who also want to go in business … and be an entrepreneur is really cool to see and share those interests.”

Middle school event being considered - The fair was sponsored for the third time by the Jennings and Rebecca Jones Foundation, and Aaron said foundation representatives have expressed interest in continuing the relationship, a welcomed development for a showcase that also serves as a recruitment tool.

Jones College of Business students who major in Business Innovation and Entrepreneurship within the Department of Management can earn a Bachelor of Business Administration upon successful completion of program requirements.

“The mentality of doing your own thing in our culture right now is at an all-time high,” said Aaron, noting that the 82 MTSU freshmen undergraduates majoring in business administration and entrepreneurship is the most ever for the program.

He applauded the major groundwork that has been developed for years by Department of Elementary and Special Education professor Tracey Huddleston through the annual Invention Convention, which brings several hundred fourth, fifth and sixth graders to campus each year to spotlight their entrepreneurial ideas. The event will celebrate its 30th anniversary in 2023.

Aaron said he and Huddleston are considering a similar event that would capture all the middle school students and begin in the spring of 2024.