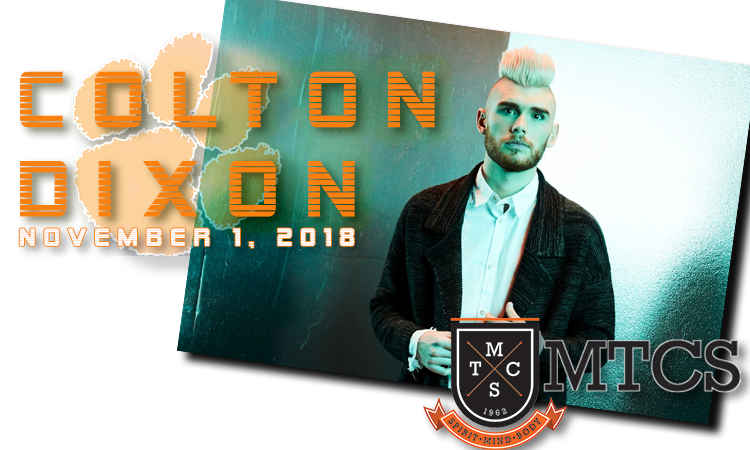 American Idol finalist and Dove Award winning artist Colton Dixon will be honored as the 2018 Middle Tennessee Christian School Alumnus of Year on Thursday, November 1st at the 58th Annual Steak Dinner. This fundraising event will once again be a night to honor the school's past and celebrate the anticipated blessings for the future. Middle Tennessee Christian School has graduated close to 1,200 students since 1979. The Steak Dinner is a great opportunity to celebrate the stories of alumni who impact their community, churches, and families. A 2010 graduate of MTCS, Colton Dixon has a remarkable story.

Colton Dixon quickly became a household name in 2012 when he made it to the top seven on Season 11 of Fox's hit show AMERICAN IDOL, and his career has been on the fast track ever since. Dixon's 2013 debut, A Messenger, set the record for biggest first-week sales by a new solo Christian act, becoming the No. 1 selling album by a new Christian artist. In just a few short years, Dixon has already played live for more than 1 million fans, performing at festivals like Winter Jam and touring with acts such as Third Day, TobyMac and Britt Nicole. Dixon has also been named a Steinway & Sons artist, following in the footsteps of legendary artists such as Harry Connick, Jr. and Billy Joel. Dixon's sophomore effort ANCHOR includes the most played Hot AC single of 2014, "More Of You," which spent three weeks at No. 1, as well as "Through All of It," his fourth consecutive No. 1 at Hot AC Radio. In 2013, Dixon won a Dove Award for Best Rock/Contemporary Album Of The Year, along with two additional nominations. In 2015, ANCHOR was honored with the Dove Award for Rock/Contemporary Album of the Year. Dixon received back-to-back K-LOVE Fan Award nominations for Male Artist of the Year in 2014 and 2015. Colton recently released his third studio album "Identity."

MTCS announced they are proud of Colton and excited that he has agreed to help make this year's Steak Dinner a special experience for all in attendance.

Tickets to the MTCS 58th Annual Steak Dinner are available at mtcscougars.org or by calling 615-893-0601.