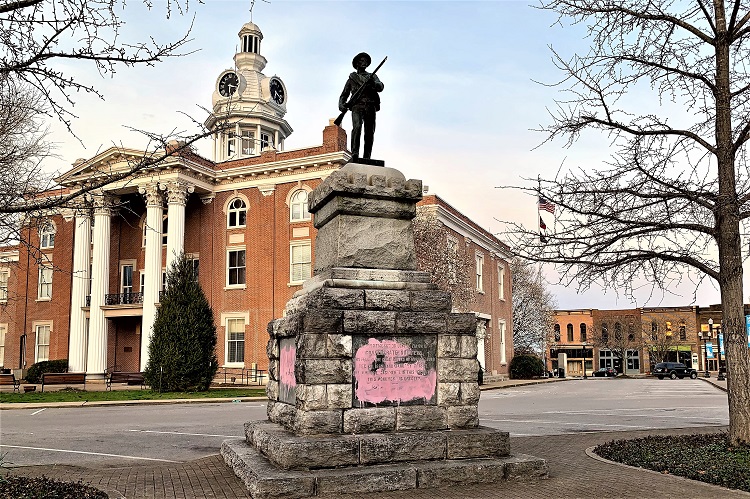 (MURFREESBORO) The statue commemorating Confederate soldiers who fought in the Battle of Murfreesboro was defaced with pink paint.

The crime was discovered Wednesday morning (3/13/2019). The monument is located on the northeast side of the Murfreesboro square.

Rutherford County Sheriff's investigators are searching for the identity of the person who vandalized the "Johnny Rebel" Confederate monument Tuesday night located near the historic courthouse.

The vandal spray painted in pink paint the words "murderer," "Ft. Pillow" and "Coward" on the statue, in an apparent reference to the Battle of Fort Pillow commanded by Lt. Gen. Nathan Bedford Forrest in April 1864 near Memphis.

Investigators are reviewing video surveillance tape taken from the areas around the square, said Capt. Britt Reed of the Criminal Investigations Division.

Videotape shows someone wearing a coat and scarf walking around the downtown square for about 10 minutes and approaching the statue at 10:21 p.m. He walks away at 10:22 p.m.

The person drove away in a dark-colored, compact to mid-sized car.

Murfreesboro Police received the call about the vandalism within a minute of that time.

People who have information on the identity of the vandal or about the crime are asked to call Detective Tony Grissom at 615-904-3055.