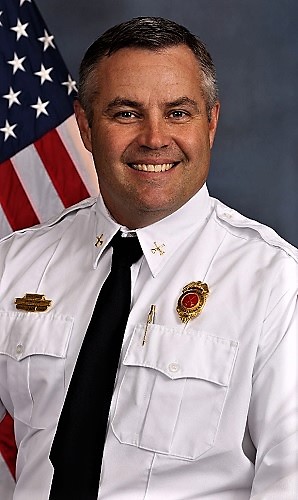 "It's bittersweet to be elevated to the Assistant Chief position," said Lowe. "I've enjoyed being on the front lines for the last 23 years and will miss starting my tours at the fire station."

Lowe added, "I'm excited for the opportunity and will do my best to build on the foundations of the training division to meet the growing needs of the department."

Lowe joined the fire service in 1996 and has been with MFRD for 18 years. He received his bachelor's degree from the University of Memphis with a dual major in Fire Administration and Fire Prevention and has a master's degree in Fire and Emergency Management Administration from Oklahoma State University.

An Advanced Emergency Medical Technician, Officer II, and Instructor II, Lowe is currently a candidate in the National Fire Academy's Executive Fire Officer Program and serves as an associate professor for the Fire Science program at Volunteer State Community College.

Lowe and wife Janet have four children: twins Lucas and Caden (14), Isabel (8), and Liam (6). In his spare time, he enjoys kayaking, fishing, and golf.