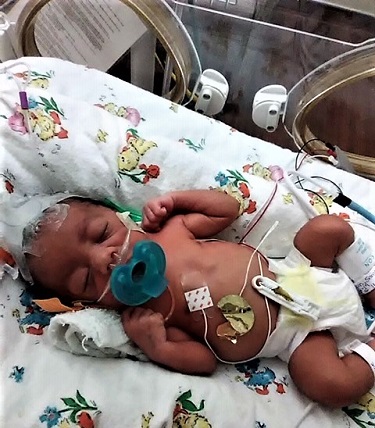 When Sheriff's Deputy Brittany Manning came to work this past Saturday (3/2/2019), delivering a premature baby was "the last thing I thought I would be doing."

About one hour into the shift, Dispatcher Kim Rydel took a call from pregnant mother Samone Richardson, who was in pain. Dispatchers Christiana Lee and Amanda Smith relayed information to Manning, who arrived within three to four minutes.

Richardson, the mother of two girls, ages 3 and 1, said she was at her Joe Brown Road home when she felt pain and her water broke for her baby who wasn't due until April 27. She called the baby's father and his uncle called the ambulance.

"Brittany came in while the baby was coming out," Richardson said.

Manning reached for baby Terrell James Elder, who cried just a little when he was born. Manning immediately noticed the umbilical cord wrapped somewhat tightly around his neck.

She cradled him in her arms and unwrapped the cord. He cried more.

Richardson is grateful for Manning and the paramedics who treated her and her son.

When Manning arrived, Richardson's contractions were less than a minute.

"She said, "I've got to push,'" Manning said. "At that point, the baby's head was right there. She pushed like twice and we had a baby."

After unwrapping the cord, Manning covered the tiny baby in a blue blanket and placed him on his mother's chest.

Manning visited TJ at the hospital.

T.J. was the first baby Manning delivered in her seven years as a law enforcement officer.

"It was a lot of emotions at once," Manning said. "It was shock, amazement, a once-in-a-lifetime experience, I hope. It was just me and her. You just did what you needed to do."

She believes she was in the right place at the right time.

"You just never know what you're going to get into," Manning said.