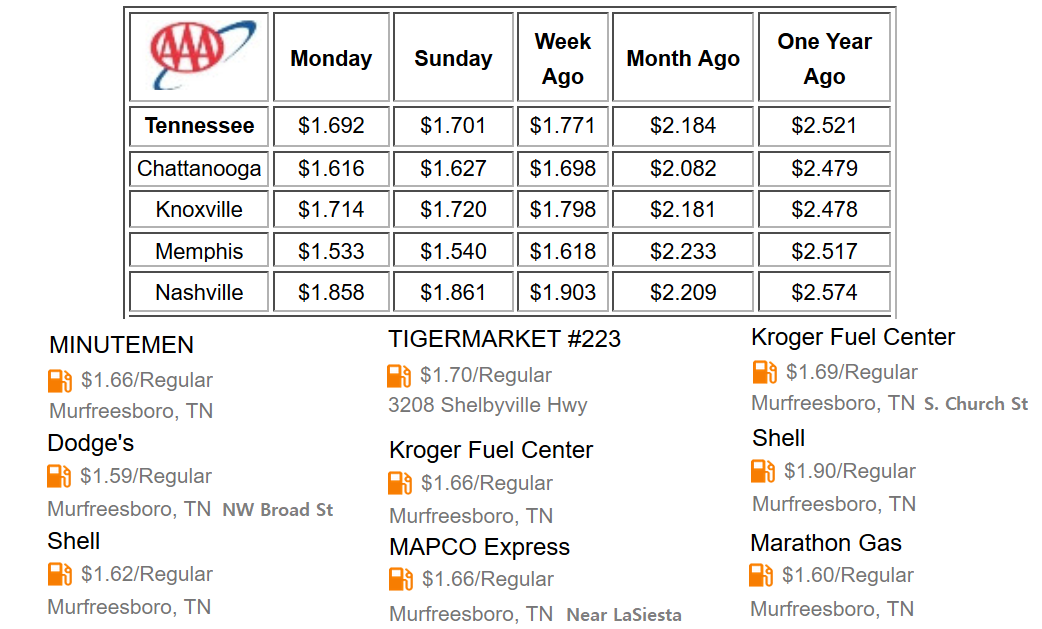 ABOVE: Randomly selected gas stations in Murfreesboro and the prices of unleaded regular fuel

"This week, market analysts are watching crude oil prices, which started to increase at the end of last week," said Megan Cooper, spokesperson, AAA - The Auto Club Group. "However, given the low demand readings, increases in crude aren't likely to have an impact on gas prices in the near-term."

- 63% of TN filling stations have sub-$1.75 gas prices
- TN gas prices have declined for 40 consecutive days for a total discount of nearly 55 cents per gallon
- Two metro areas have seen double-digit decreases at the pump in the last week, Kingsport (nearly 15 cents) and Johnson City (14 cents)
- Eight metro areas have average prices below $1.75 per gallon

Today's national gas price average is $1.92. That is nine cents cheaper than last Monday, 48 cents less than a month ago and 81 cents less expensive than a year ago. On the week, pump prices continued to push less expensive with gasoline demand registering at its lowest point since 1993. The latest Energy Information Administration (EIA) weekly report puts demand at 6.7 million b/d - a nearly 30 year low - and it's likely to push lower as Americans are urged to stay at home at least until the beginning of May.

In addition to crude oil, market analysts are also watching refinery rates. The U.S. refinery utilization average is down to 82%, a low not seen since September 2017. Given the drop in crude oil and gasoline demand, which is expected to push even lower, refineries are reducing production in hopes this could help to balance the amount of gasoline supply in the country.

At the end of Friday's formal trading session, WTI increased by $3.02 to settle at $28.34 per barrel. Domestic crude prices increased at the end of last week, following news that the Organization of the Petroleum Exporting Countries (OPEC) and its partners, including Russia, planned to hold an emergency meeting today to discuss potential crude production cuts amid the global oversupply caused by COVID-19. However, OPEC and its partners have moved the meeting to Thursday, April 9. Crude prices are likely to remain volatile this week until the meeting, where the market will be looking to see if production cuts are enacted and if they are drastic enough to curb the growing oversupply of crude in the global market.