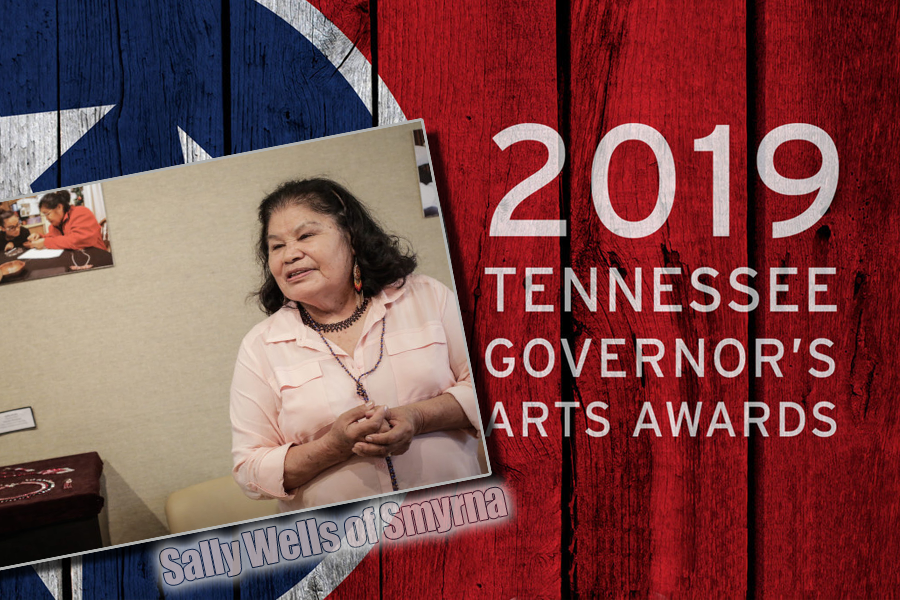 Governor and First Lady Lee have announced twelve individuals who will receive a Tennessee Governor's Arts Award, Tennessee's highest honor in the arts. One of the 12 lives in Rutherford County. Congratulations to Sally Wells (bio below) of Smyrna, TN who received the Folklife Heritage Award.

Since 1971, the Governor's Arts Awards have celebrated those who have made outstanding contributions to the state's cultural life. An awards ceremony for the recipients will take place in Conservation Hall at the Executive Residence on October 23, 2019.

"Tennessee's artistic heritage and culture is some of the richest in the nation. These twelve outstanding recipients are true leaders in the arts and culture in our state, and they help make Tennessee the special state it is," Governor Lee said. "Maria and I congratulate them, and we are so glad they call Tennessee home."

The twelve recipients come from all walks of life and symbolize the tremendous variety of the arts and culture of Tennessee. The Governor's Arts Awards are presented in three different categories -- Folklife Heritage, Arts Leadership and Distinguished Artist.

"The awards are a testimony to the value that the arts bring to our communities, our schools, and our lives," said Joe Kilgore, chair of the Tennessee Arts Commission.

The 2019 Governor's Arts Awards recipients are:

"The arts help build stronger communities by enhancing quality of life and the distinctive character of Tennessee places," said Anne B. Pope, Executive Director of the Tennessee Arts Commission. "The 2019 recipients of the Governor's Arts Award have each contributed significantly in defining who we are as a state."

ABOUT SALLY WELLS of SMYRNA:

A revered elder in Tennessee's Choctaw community, Sally Wells is recognized as a master of several endangered Tennessee art forms. As a bead worker, dressmaker, traditional cook, and speaker of the Choctaw language, her life and work represent a direct link to a deep and rich Native American cultural heritage. Raised on the Mississippi Band of Choctaw Indian Reservation, Sally spent her childhood in the Bogue Chitto community. One of eight children, she attended the local Indian school system. Her family then joined a small migration of Mississippi Choctaw seeking agricultural opportunities in West Tennessee. The new Tennessee Choctaw community kept close ties to the Mississippi reservation.

Sally attended the public schools of Lauderdale County, as her family continued to speak the Choctaw language and pass along its culture. At family gatherings, she helped prepare hominy soup and other Choctaw foods, frequently cooking over an open fire in the traditional manner. Sally credits her mother for teaching her how to create traditional Choctaw clothing and beadwork.

Sally has continued to create art and to promote and preserve Choctaw culture for her entire life. She spent much of her career working for the US Department of Health and Human Services, Indian Health Service. She is also a founder and board member of the Native American Indian Association, a volunteer role she has held for thirty-seven years. She serves each year as the Chair of the Arts and Crafts Demonstration Village at the Tennessee Indian Education Pow Wow, Tennessee's largest Native American cultural event, held each year at Long Hunter State Park. As leader of the Demonstration Village, Sally has ensured that all vendors and demonstrators at the event are Native artists practicing authentic art forms.

Of Sally, folklorist Liza Blair stated, "Her skill is undeniable. Sally possesses an innate drive to make authentic beadwork reflective of her Choctaw heritage. She is the kind of artist who understands the need to share ideas and techniques, be that with students during a classroom demonstration, participants attending the Native American Indian Association festival, or members of the community."

In 2019, Sally was chosen as an artist in residence at the Creative Discovery Museum in Chattanooga, where she provided hands-on demonstrations to Museum guests. Her work has previously been displayed at the Tennessee Arts Commission gallery.

In 2015, Sally Wells was one of the first master artists chosen to teach in the Tennessee Arts Commission's Traditional Arts Apprenticeship Program, an initiative created to support our state's finest tradition bearers as they preserve rare and endangered art forms. Her apprentice was her granddaughter, Madi Dean, to whom she taught Choctaw beadwork using seed and bugle beads, as well as to make traditional Choctaw collar necklaces, earrings, bracelets, and hanging necklaces that go with the clothes worn on special occasions. Of this project, she said: "This is our life, making jewelry and clothing for our culture, and I pass it on down, what skill I have, in the community and to the children and grandchildren, so they would continue it."