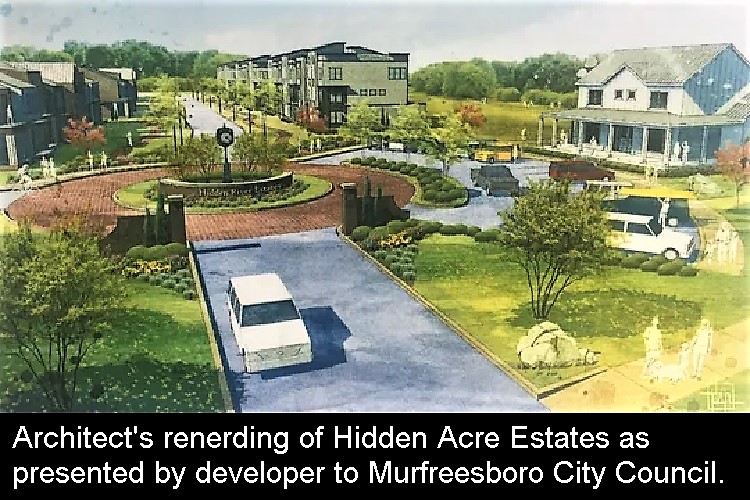 (MURFREESBORO) The Murfreesboro City Council convened at 7:00 o'clock Thursday evening (1/30/2020) and after much discussion, council voted 5 - 2 to rezone approximately 30-acres of land off Cason Trail for the purpose of creating Hidden River Estates.

Council approved the rezoning 5 to 2 in Thursday night's first reading. The issue must now pass a second reading

As you recall, the developer presented first plans about the development over a year ago.

When that happened, several persons living in surrounding subdivision became concerned with the potential of dramatically increased traffic on narrow neighborhood roads, described by the group as "already congested with traffic".

Last year, approximately 3,000 residents signed a petition voicing their concern over the possibility of adding 800 more vehicles traveling roads near the Stones River Greenway's Cason Lane Trailhead. In addition, those who opposed the project addressed how the development would negatively impact the Stones River Greenway and the wildlife that inhabits the area.

Over the past several months, public pressure has encouraged the developer to address changes that would resolve their concerns.

The New Salem Road (State Highway 99) is currently undergoing massive improvements at this time. As a part of the proposal, the developer agreed to further improve impacted areas of that major thoroughfare. They also agreed to donate public use land that would enable the expansion of the dog park and trails at the Cason Trailhead.

Despite that, Councilmember Bill Shacklett cast one of the opposing votes on Thursday night. He noted that he felt it was "the wrong time to approve this development".

Developers indicate that it will possibly take a decade to complete all phases of Hidden River Estates, described as an upscale neighborhood on 30-acres of land. The area has small ponds, a recreation center and is adjacent to the greenway.