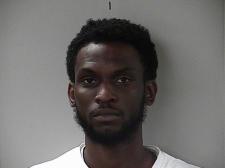 A reported indecent exposure incident at Carrington Apartments on Rideout Lane leads to the arrest on an active warrant.

The victim reported noticing a black male who she said "stripped down to his boxers and pulled down to his knees. The male then drove away.

A warrants check revealed Yancy also had an active warrant and was taken into custody.