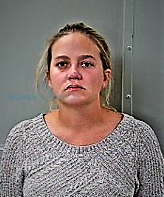 (MURFREESBORO) Kelsey Ketron-Randolph was released from the Rutherford County Adult Detention Center on Friday (11/8/2019) morning. Since her bond was over $50,000, a hearing before a judge was required. That created a logistics issue, because the local DA and staff have recused themselves and Hamilton County DA was named., there was a long-distance issue.

Mrs. Kelsey Ketron-Randolph's representatives have attempted to get her freed on bond, but long-distance court issues created problems since it must be coordinated with a Chattanooga based DA.

Everything was worked out Friday morning and Mrs. Ketron-Randolph was released.

Her attorney Trey Harwell earlier argued that a person has the right not to wait in jail more than a week before there is a hearing. At that point, the courts abided by regulations and the 29 year old woman's freedom was granted.

Deputies accompanied Ketron-Randolph from the jail to a waiting SUV.

(MURFREESBORO) Here is an update on the arrest of Kelsey Ketron. A Rutherford County Grand Jury has returned three indictments against Universal International Insurance employee Kelsey Ketron who faces more than 70 separate charges.

At approximately 7:00 o'clock Monday evening (11/4/2019), Murfreesboro Police Detective Chris Pitts served the indictments on Ketron at her Murfreesboro home. She was taken into custody and booked into the Rutherford County Adult Detention Center.

As of Tuesday morning, Ketron was still being held on a $100,000 bond at the Rutherford County Adult Detention Center.