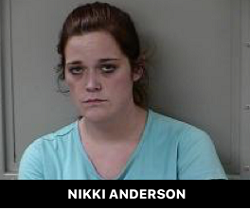 A South Church Street woman is in jail on various drug charges after police were called to a problem concerning DCS taking custody of two children.

After 6 Friday night, MPD was called to the Select Inn for an unknown problem. When they arrived, they discovered a DCS worker was taking custody of 27-year old Nikki Anderson's two children.

Officers noticed marks on the woman's arms consistent with drug use. A search of the room revealed 15 syringes with residue of several drugs like Tramadol and Tizanidine. Anderson was taken to jail on charges of possession of a schedule four drug, possession of a legend drug and drug parapharnalia. Bond was set at 45-hundred dollars.

The children were taken into DCS custody.