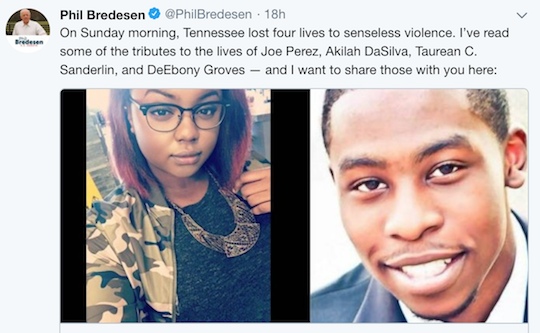 Release from Mary Mancini, head of the TN Democratic Party

Our deepest sympathies continue for families of those who were lost in the horrific shooting at the Waffle House in Antioch, TN: Taurean C. Sanderlin, Joe R. Perez, DeEbony Groves and Akilah DaSilva, and our prayers are with those injured in the attack who are still recovering. And a mere "thank you" is not enough for James Shaw, Jr., whose actions saved his life and the lives of many others.

As we grieve along with the families who lost the ones they loved, we must remember that it is beyond the time to act to keep weapons of war out of our communities. Tennessee Democrats continue to work to implement common sense gun safety measures regardless of the NRA/Republican brick wall of silence that continues after each of these preventable tragedies. And we will keep trying -- because in the words of the Parkland students, "We need more than thoughts and prayers -- we need meaningful action."

Friday, April 20 was the 19th anniversary of the 1999 Columbine school shooting that rocked our nation. Students at schools across Tennessee participated in a walkout to protest the fear of gun violence they live with every day.

Every student, no matter where they live, should have the freedom to learn without fear of losing their lives -- and in the 19 years since Columbine, too many lives have been lost because of our failure to institute simple, common sense solutions.

I was fortunate enough to be in Knox County last Friday to join State House candidates Gloria Johnson and Eddie Nelson in support of the student #NeverAgain walkout at the L&N STEM Academy. It was very inspiring because not only did the students walk out, but they also had a voter registration table, a table with information needed to contact legislators, and gave inspiring speeches and remembrances of the Columbine massacre.

Democrats are fired up in Knox and Loudon Counties. The weekend also included coffee with some of our stellar candidates: State House candidates Eddie Nelson, Katie Trudell, Gloria Johnson, and Alex Dunn (in front of the Vols mural!).

Again, the above was released by Mary Mancini, head of the Tennessee Democratic Party.