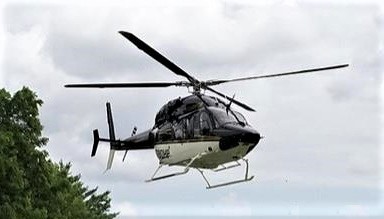 Michael Holden Thomas, a suspect in a domestic assault in Cannon County, was apprehended Sunday (7/28/2019) morning in DeKalb County with help from the Tennessee Highway Patrol.

Chief Deputy Keith Lowery said, "Thomas was accused of attempting to strike a deputy, as he fled the Murfreesboro bar, and subsequently striking a Rutherford County Sheriff's vehicle while fleeing."

Thomas is facing multiple felony charges, including aggravated kidnapping and aggravated assault in Rutherford and Cannon counties along with a violation of parole from Kentucky.

Cannon County Sheriff Darrell Young requested Rutherford County Sheriff's Office to help search for Thomas Wednesday (7/24/2019) after the domestic case and after he allegedly broke into a house while carrying a machete.

THP's Aviation helicopter joined the search for Thomas along with Rutherford and Cannon county deputies throughout Saturday night and into Sunday morning. He was apprehended in a stolen truck from Goochie Ford Road in Rutherford County.

DISCLAIMER: All suspects are presumed innocent until proven guilty in a court of law. The arrest records or information about an arrest that are published or reported on NewsRadio WGNS and WGNSRadio.com are not an indication of guilt or evidence that an actual crime has been committed. The information was provided by the agency (agencies) from their records.