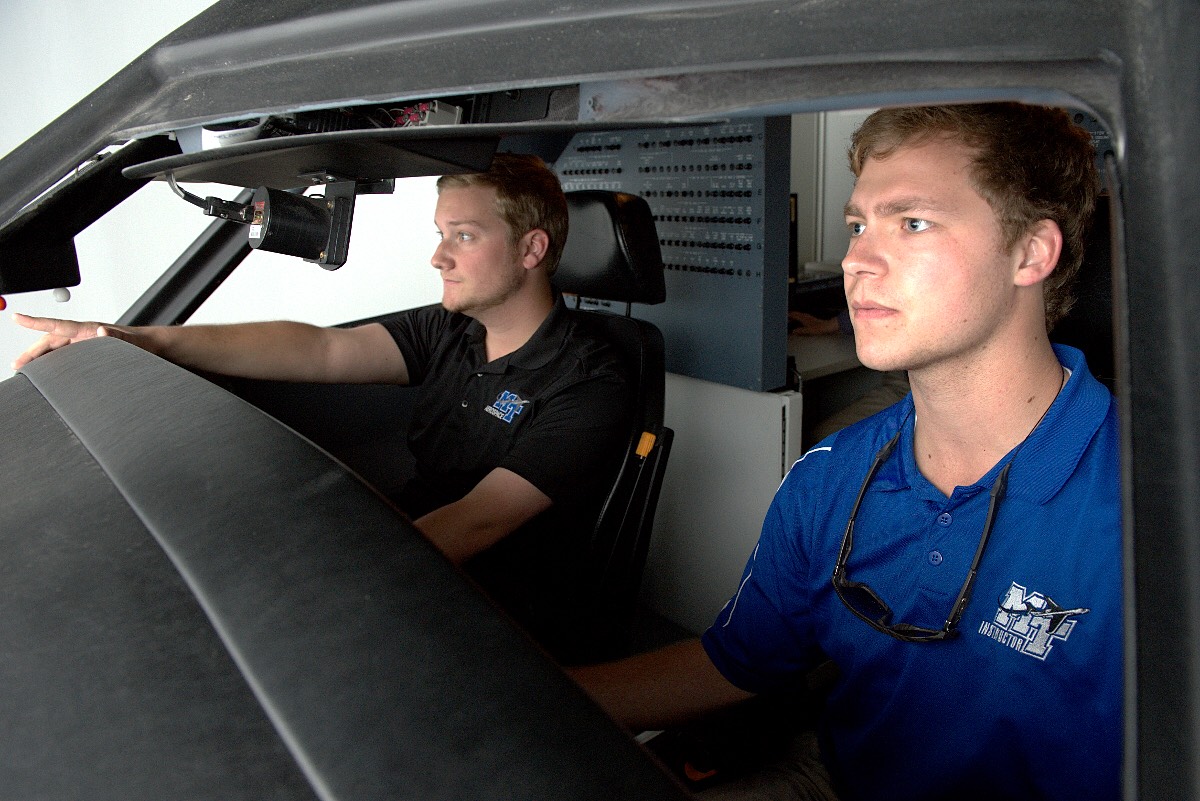 MTSU seniors Charles Greenfield, left, of Kingsport, Tennessee, and Kevin Allsop of Knoxville, Tennessee, check the view from the cockpit of the flight simulator May 5 during the dedication of the Flight Simulator Building at Murfreesboro Airport. (MTSU photo by J. Intintoli)

MTSU students are the beneficiaries of a new $700,000 Department of Aerospace Flight Simulator Building dedicated Thursday (May 5) at Murfreesboro Airport.

Accompanied by aerospace faculty and staff and other university administrators, President Sidney A. McPhee led the tributes to the 3,600-gross-square-foot metal facility that will house four flight simulators at MTSU's Flight Operations Center just off Memorial Boulevard.

"This is a very impressive building," McPhee said. "With the various simulator technology we have for training our students, a new facility is an added bonus and a great space for them to learn as they prepare for aviation careers."

"We're very excited to begin using our new simulator building," said Wendy Beckman, interim chair in aerospace. "Our faculty, staff and students have already been in there this semester. We moved over our four simulators that were in our old hangar across the airport. That hangar has been returned to the maintenance management program."

Seniors Charles Greenfield of Kingsport, Tennessee, and Kevin Allsop of Knoxville, Tennessee, said the building has been a great addition as they finish their final year and await graduation Saturday, May 7.

"It has been nice to learn in a facility like this," Greenfield said, "and to see the (aerospace) logo out front."

"This has been great," said Allsop. "It has been nice having a three-hour class in this building and to have the new furniture."

The simulators are used by all professional pilot students, from early training through their transition to turbine-powered aircraft, Beckman added. Students began utilizing the new building in January when spring semester classes got underway.

• Frasca 142, a generic multiengine trainer that students fly as part of obtaining their multiengine certificate.

To learn more about aerospace, which is one of 11 programs in the College of Basic and Applied Sciences, visit http://www.mtsu.edu/programs/aerospace/ or call 615-898-2788.