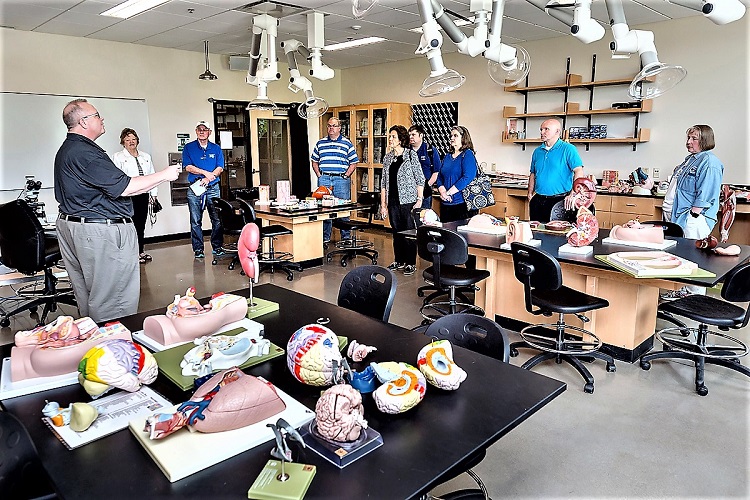 MTSU College of Basic and Applied Sciences Dean Bud Fischer leads a tour of the Science Building during a previous MTSU Spring Showcase. This year's showcase will be held April 5-13. (MTSU file photo by Andy Heidt)

Working in collaboration with many campus departments and programs, the Office of Alumni Relations will offer the spring showcase allowing university alumni and friends to sample what's taking place inside and outside classrooms this spring.

The full slate of events is listed on www.mtalumni.com. Click on the MTSU Spring Showcase featured item.

Activities and events include:

Rhonda King, Alumni Relations assistant director, said the MTSU Spring Showcase "is a universitywide effort to engage alumni and the community members in today's MTSU. Colleges and departments from all over campus are hosting classes, productions, events, and activities throughout the scheduled nine days."

"We invite you to sit in on a class or lecture, see a play, enjoy a concert, gaze at the stars, cheer on the Blue Raiders and more," she added. "From fashion to outer space and Harry Potter to chicken wings and many things in between, there is something for everyone during this year's Spring Showcase."

And there's quite an array of open classes alumni and the general public can sit in on, especially in the Colleges of Liberal Arts and Basic and Applied Sciences. Subjects include air traffic control, concrete and construction, aerial videography with a drone, Harry Potter-themed lectures, "philosophy of the mind," folk and fairy tales and language and literacy in education.

King said the Office of Alumni Relations will be offering personalized tours of campus. "Let us know what you want to see and we will custom design a tour for you," she said.