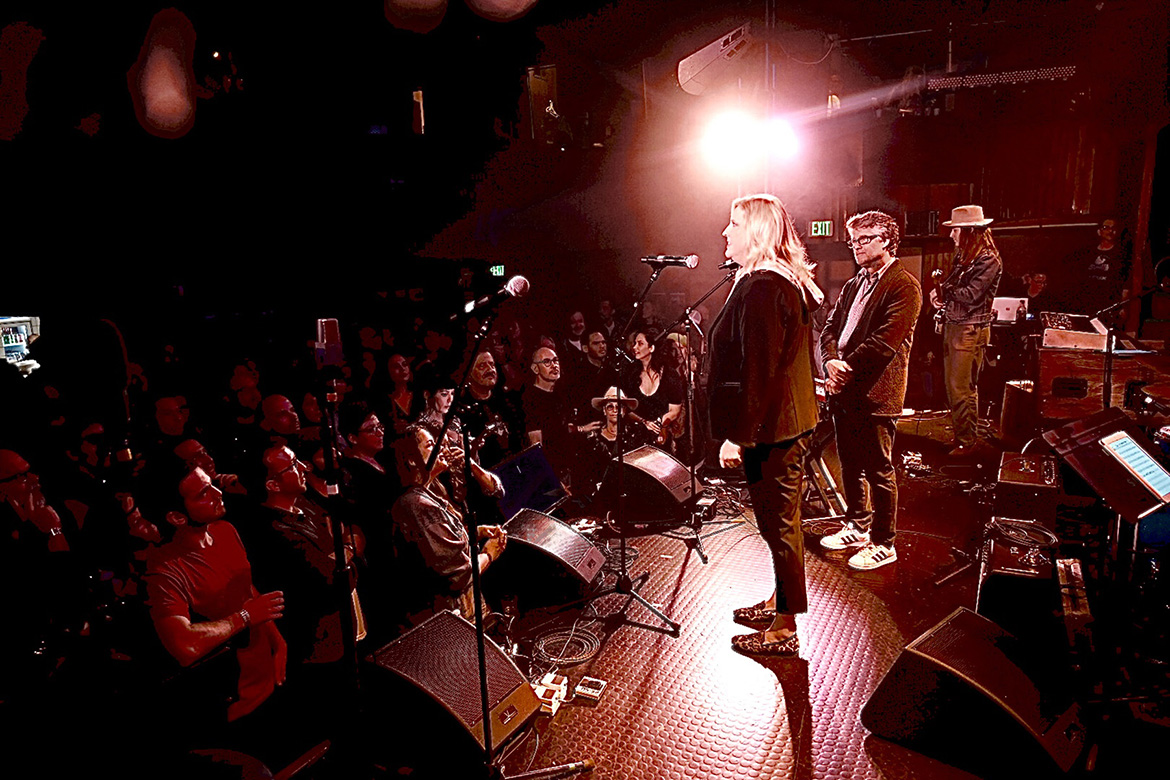 Beverly Keel, new dean of the MTSU College of Media and Entertainment, speaks to the crowd Saturday night at the Americana Music Association pre-Grammy tribute to music legend Willie Nelson at the Troubadour in Los Angeles. The concert was held in advance of the 62nd annual Grammy Awards set for Sunday at Staples Center. (Photo by Andrew Oppman)a

Beverly Keel took the reins of the MTSU college on Jan. 1. As former chair of MTSU's recording industry department, Keel is leveraging her music connections to further bolster the university's world-class standing. Keel stated at the pre-Grammy event...

The West Hollywood venue helped launch the careers of rock and folk legends, including the Eagles, James Taylor and Elton John. An array of artists, highlighted by John Prine, celebrated and performed Nelson's music.

"We are thrilled to support the work of MTSU's dean of Media and Entertainment, Beverly Keel, and the dedicated professors at MTSU as they educate the next generation of artists and music industry professionals," said Jed Hilly, the association's executive director.

President Sidney A. McPhee and Provost Mark Byrnes on Friday joined students and faculty from the College of Media and Entertainment for MTSU's seventh outreach trip to music's biggest event.

MTSU honored its Grammys nominees at a brunch Saturday afternoon in downtown Los Angeles that attracted about 100 industry leaders, alumni and supporters of the university.

McPhee and Byrnes also used the event to celebrate the appointment of alumna Keel as dean of the College of Media and Entertainment.

"Today was a perfect example of why MTSU travels every year to the Grammys," McPhee said. "We connect our students with leaders in their chosen discipline and recognize the careers and accomplishments of alumni."

On Friday, about 50 MTSU graduates from across Southern California, representing a broad range of careers including and in addition to recording industry, joined McPhee and Byrnes for the university's annual alumni reception.

And, before Friday's event, six students and two faculty members toured Staples Center, the site of Sunday's national telecast of the 62nd annual Grammy Awards, and met with Grammy-winning producers and artist managers.

"This trip for me is an experience of a lifetime," said Jordyn Stoddard, a music business senior from Jacksonville Beach, Fla. "I would have never imagined being in rooms with some of the people we have gotten to meet.

"Spending time in LA has allowed me to see a whole other side to the industry that I did not know existed and make some excited about my future," she said.

Senior Angele Latham, a journalism major from Hickman, was covering the students' Grammy experience on assignment for Sidelines, MTSU's student newspaper, which she serves as editor-in-chief.

"It's so amazing being able to cover this trip for MTSU," she said. "LA has a pulse of its own and a music scene that can't be beat, so being a part of it with all of these talented students is a once-in-a-lifetime chance."

On Sunday, just before the Grammy Awards telecast, MTSU co-sponsored a reception for Leadership Music at a restaurant just steps away from Staples Center.

The event attracted several graduates from the Nashville-based leadership program for music industry leaders, including Keel, who completed the program in 2001.