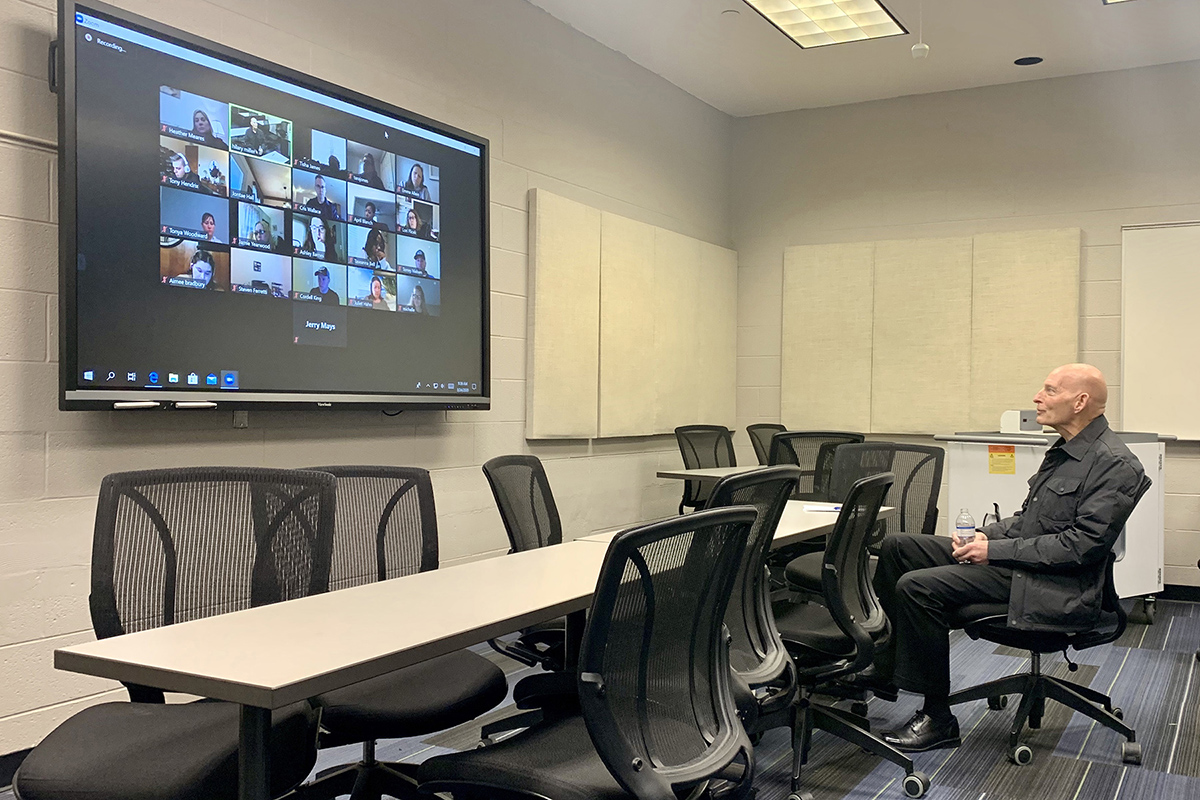 The course is called an "intensive" because it's held from 8:30 a.m. to 4 p.m. for a solid week. In other words, it's not naturally conducive to remote delivery, but instructors knew they couldn't postpone the course entirely. All of the students in the class are working adults trying to finish their bachelor's degrees in Integrated Studies, and many had already taken time off work or needed the class for graduation.

Instructors pushed the start date back by just three days to give themselves time to adapt to the task at hand. "The course is called Leading and Developing Teams, so we had to be super purposeful and way out in front of things," said Miller. "Teaching about being a team leader meant we had to be prepared for anything and ready to solve any problem that came up."

The instructors had to move quickly. They started putting course material online on March 16, and the course began only nine days later. Borrowing a classroom with the proper equipment from the College of Media and Entertainment, they were ready a day before classes started.

Through Zoom videoconferencing and a slew of online tools for team building, Miller, McCarthy and Huber created a course that closely mirrored the usual face-to-face sessions they've taught many times in the past.

True to their military training, the trio left nothing to chance, virtually gathering their students the night before to review the technology and troubleshoot any problems.

"We practiced with Zoom, we practiced with file sharing, and we made sure everyone could see our PowerPoint presentations," Miller said. "We also gave them our cell phone numbers in case any problems came up."

Typically, the Leading Teams class uses small group discussions and projects to move things along. Instead of splitting the classroom in half or into thirds as usual, the instructors used different rooms in Zoom to replicate the small-group environment.

"We were constantly moving people to groups and letting them have their own discussions about the lecture," Miller said. "Sometimes, we would stop our lecture abruptly and split them up for five minutes before resuming."

Using Zoom also allowed instructors to see the dialogue among students in the chat. Miller said it was so encouraging to see students telling each other they had a good question and offering follow-ups to a point somebody else made.

The students enjoyed the creative format, too.

"Day one was a little hectic because everyone was adapting, but by lunchtime, we were rocking and rolling," said Heather Meares, an adult degree completion student from Petersburg, Tennessee. "I orchestrate training meetings and give talks to hundreds of people regularly. I expected to lose that group chemistry that you get in a classroom, but we were able to get that chemistry by the first afternoon. It amazes me that we were able to do that using video conferencing."

The class digitally shared documents, assignments and videos. Each student uploaded a daily video reflection, and that empowered them to have fun with their videos and respond to other students' videos with their own.

"We watched the videos the next day in class, and we were really able to see people grow and become more comfortable as the week went on," Meares said.

Still, 7.5 hours is a long time for anyone to be on-camera with a class, and the instructors did their best to keep everyone engaged.

"Sometimes we noticed students looking a little exhausted, and we'd say, 'Okay, everyone stop and send a GIF to the chat that shows how you're feeling right now,'" Miller said. "It gave everyone a chance to breathe."

Under normal circumstances, a staple of the course is a tour of the Daniels Center inside the Keathley University Center in the heart of campus. To compensate for the remote environment, McCarthy gave students a virtual tour of the space, sharing its purpose on campus and in the community.

Miller is director of the center, and Huber, who spent 38 years in the U.S. Army, is MTSU's senior adviser for veteran's and leadership initiatives.

"It's amazing to be in the same (virtual) room as people of the caliber of Dr. Miller, Colonel McCarthy and General Huber," Meares said. "If people like that can make themselves available to more people by using Zoom, that would be great. I feel honored to be taught by these great leaders."

The course has been so successful that instructors hope to continue a Zoom-only version for out-of-state students in the future. Though it's been a challenge, Miller said the instructors appreciate the opportunity to sharpen their own team-building skills as they teach.

"We are doing that still by adapting to this new technology," she said. "We've built this team virtually, and now our students have to turn around and do the same thing at work since so many of them are working from home."

For more information about the Leading Teams course or the Applied Leadership program, visit MTSU.edu/FinishNow.