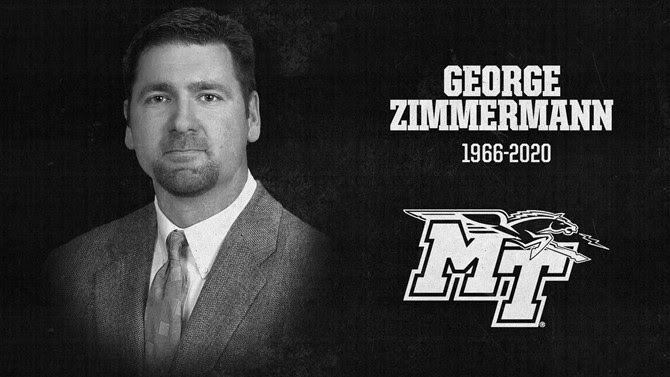 Zimmermann was a standout two-way player for the Blue Raider baseball team from 1986-to-1989, and worked for Middle Tennessee State for more than 25 years.

The Nashville, Tenn., native was a pitcher and first baseman for Middle Tennessee and was part of two Ohio Valley Conference championships and played in two NCAA Regionals. Zimmermann was a starter on the 1987 and 1988 championship squads.

Zimmermann played for two of Middle Tennessee's iconic coaches, starting for John Stanford's teams in 1986 and 87, and for Coach Steve Peterson in 1988 and 89. He was the OVC Player of the Year in 1987 and was later awarded MTSU's Male Student-Athlete of the Year. He was also the recipient of the 2019 Railbird Jacket, given annually to someone who goes above and beyond for the baseball program.

Zimmermann is among the Top 10 of four different career categories at Middle Tennessee. He is fifth all-time with 168 RBI, seventh for doubles with 51, eighth for walks with 103 and 8th for games played with 217 appearances.

After receiving his B.S. in Criminal Justice, Zimmermann began working for his alma mater, which he served loyally as an employee of Sodexo, MTSU Sports and Leisure for 25 years.

In lieu of flowers, memorial donations may be given to Melanoma Research Foundation,donate@melanoma.org.