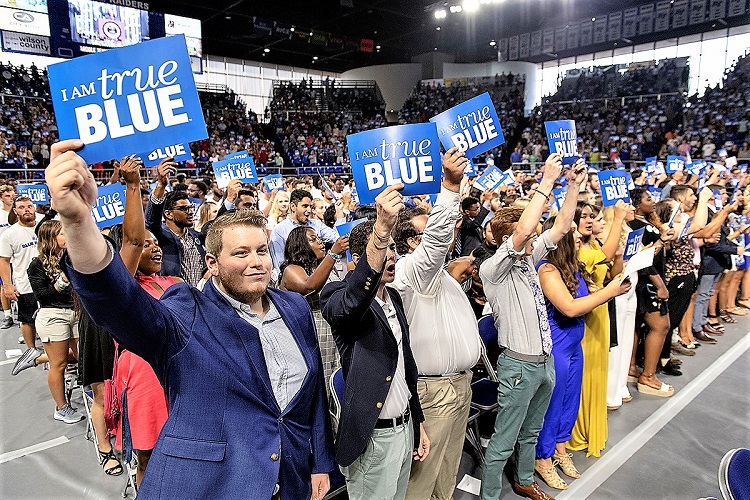 (MURFREESBORO) Thousands of new Middle Tennessee State University freshmen (Class of 2023) and transfer (Class of '21) students and their families will help ring in the 2019-20 academic year during University Convocation at 5 p.m. Saturday, Aug. 24, in Murphy Center. The public is invited.

Attendees will hear from President Sidney A. McPhee, Vice President of Student Affairs Deb Sells and Tara Westover, 32, author of "Education: A Memoir," who penned the Summer Reading selection.

Convocation has become an annual rite of fall at MTSU. It is designed to welcome new students into the learning community and to immediately engage them in the learning process, said Sells, who is also vice provost for Enrollment and Academic Services.

"The foundation for this effort is the Summer Reading Program, through which each new MTSU student is required to read a common piece of literature prior to his or her arrival on campus," Sells added.

"'Educated' is Westover's story of growing up isolated as part of a survivalist family living off the grid in Idaho," Sells said. "It's also the story of the grit and determination that eventually secured her admission to Brigham Young University, then to Harvard and eventually to a doctoral degree from Cambridge University."

"If (J.D.) Vance's memoir offered street-heroin-grade drama, (Tara) Westover's is carfentanil, the stuff that tranquilizes elephants. The extremity of Westover's upbringing emerges gradually through her telling, which only makes the telling more alluring and harrowing. ... By the end, Westover has somehow managed not only to capture her unsurpassably exceptional upbringing, but to make her current situation seem not so exceptional at all, and resonant for many others."

More than 3,000 new students and several thousand parents will attend Convocation, an event where faculty and administrators don academic regalia to open the school year.

Sells said many faculty will incorporate the summer reading into early writing assignments or a theme for class discussion.