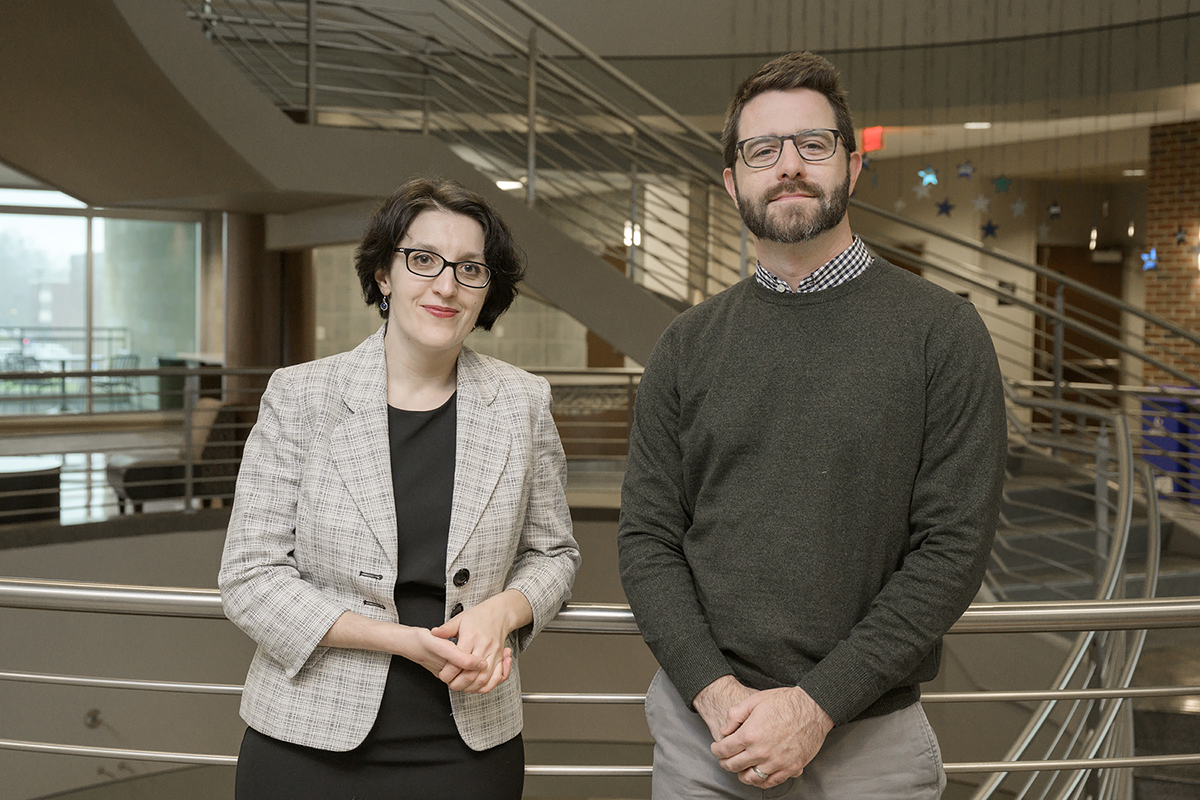 MTSU assistant professors Hanna Terletska, left, from the Department of Physics and Astronomy in the College of Basic and Applied Sciences and Seth Jones from the Womack Educational Leadership Department in the College of Education are recipients of National Science Foundation Early Career Development grants totaling nearly $1,200,000 combined for five-year research projects. This marks the first time MTSU faculty have received NSF CAREER Awards. (MTSU photo by Andy Heidt)

The NSF CAREER awards support junior faculty who exemplify the role of teacher-scholars through research, education and the integration of education and research within the context of the mission of their organization. Jones is in the Womack Educational Leadership Department; Terletska is in the Department of Physics and Astronomy.

Given annually, the award comes with a federal grant for research and education activities for five consecutive years. Combined, their grants total nearly $1.2 million.

The recognition is considered the NSF's most prestigious awards for early-career faculty. The NSF receives more than 50,000 competitive proposals for funding each year and makes about 12,000 new funding awards.

"Congratulations are in order for these two outstanding MTSU faculty members at this point in their careers," university President Sidney A. McPhee said. "This is a testament to their determination to be highly successful researchers and educators, and a mentor to their students. I believe this will be a catalyst for other faculty researchers to apply for their own grants as well."

The organization selects CAREER recipients based on their "potential to serve as academic role models in research and education and to lead advances" in their fields and organizations.

The NSF awarded $499,879 to Terletska, an assistant professor, for her "Beyond Ideal Quantum Materials: Understanding the Critical Role of Disorder and Electron-Electron Interactions" proposal. The development plan is a fundamental research, education and outreach program that focuses on theoretical and computational study of functional quantum materials with strong electron-electron interactions and disorder.

Jones, an assistant professor, received a five-year, $700,000 NSF grant for his "Supporting Statistical Model-Based Inference as an Integrated Effort Between Mathematics and Science" proposal that seeks to design opportunities for middle school math and science teachers to coordinate their instruction to support a more coherent approach to teaching statistical model-based inference.

Provost Mark Byrnes said that "winning two CAREER grants in the same year is a remarkable achievement for MTSU and demonstrates the high-quality research conducted by our faculty."

David Butler, vice provost for research and dean for the College of Graduate Studies, said NSF CAREER Awards "are very rare and difficult to obtain as they are for the top junior scholars in their fields."

"We are extremely proud of the efforts by Drs. Terletska and Jones on their remarkable accomplishments to date," Butler added. "Their success is a symbol of how MTSU is transforming into a research university, producing valuable research and development for the state of Tennessee and its citizens, fulfilling the role of a publicly-supported state institution."