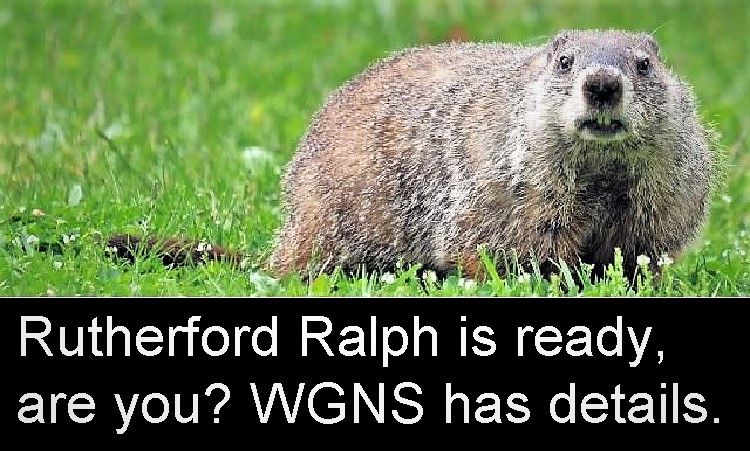 (MURFREESBORO) The big question, "Will he or won't he?" Sunday, February 2nd was GROUND HOG'S DAY and neither Punxsutawney Phil nor Rutherford Ralph saw their shadows. As folklore has it, spring is almost here!

In a time when technology rules supreme, and the computer in our smart phones rivals the power of what used to be in major corporations decades ago, every second day of February, we stumble back to the dark ages for a tradition bit of sooth saying using a chubby rodent.

Double Proof, Spring Is Near

While many eyes are on Pennsylvania, NewsRadio WGNS is focusing on rural Rutherford County and following "Ralph" closely. After all, Pennsylvania is a long way away, and an accurate weather forecast needs to be closer to home.

That's why starting 35-years ago, the Good Neighbor Station befriended Rutherford Ralph as the key predictor of the duration of winter in these parts.

The granddaddy of them all is Phil, who lives in the small Pennsylvania township of Punxsutawney, population 5,962. Although possibly more famous, data shows that Ralph is no less scientific or less accurate.

As legend has it, if Ralph comes out of his burrow and sees his shadow--he is frightened, turns around and scampers back in. That means we have six more weeks of winter. If the fury rodent does not see his shadow, he stays out as a sign that spring is imminent.

Amazingly, with the official Murfreesboro sunrise at 6:45AM, Ralph saw no shadow as he scampered across that field in Lascassas. The cuddly ball of fur continued to romp, thus Ralph and Phil agree that spring will come soon this year! In fact, there was no shadow an hour later and he finally went back to the burrow, not because of fear, but as a result of fatigue.

WGNS always strives to include important information in our news stories. Now, we're going to tell you "the rest of the story" about the groundhog. It is also known by many as a woodchuck. You remember, "how much wood could a woodchuck cut, if a woodchuck could cut wood"?

It is also one of 14 species of marmots, and basically considered a giant ground squirrel found in North America. That family is Sciuridae and is a part of the Rodentia order. So yes, it is a rodent.

WGNS is offering you this vital information so that you can be the one who stimulates the conversation today at church or afterwards at lunch. If the Super Bowl drags in places, you might also bring up this information.

Another question that often arises is whether or not groundhogs are aggressive? Only with gardens! They are described as binge eaters, and can wreak havoc to your garden.

Keep in mind, this giant ground squirrel does have sharp teeth and is cornered--they might be frightened enough to bite. In the real world, this species usually scampers away to his burrow when humans come near.

Well, that's the story. It would be a good idea to next check out your spring wardrobe, because it's on the way!