Partnership formed between Boy Scouts of America and MTSU 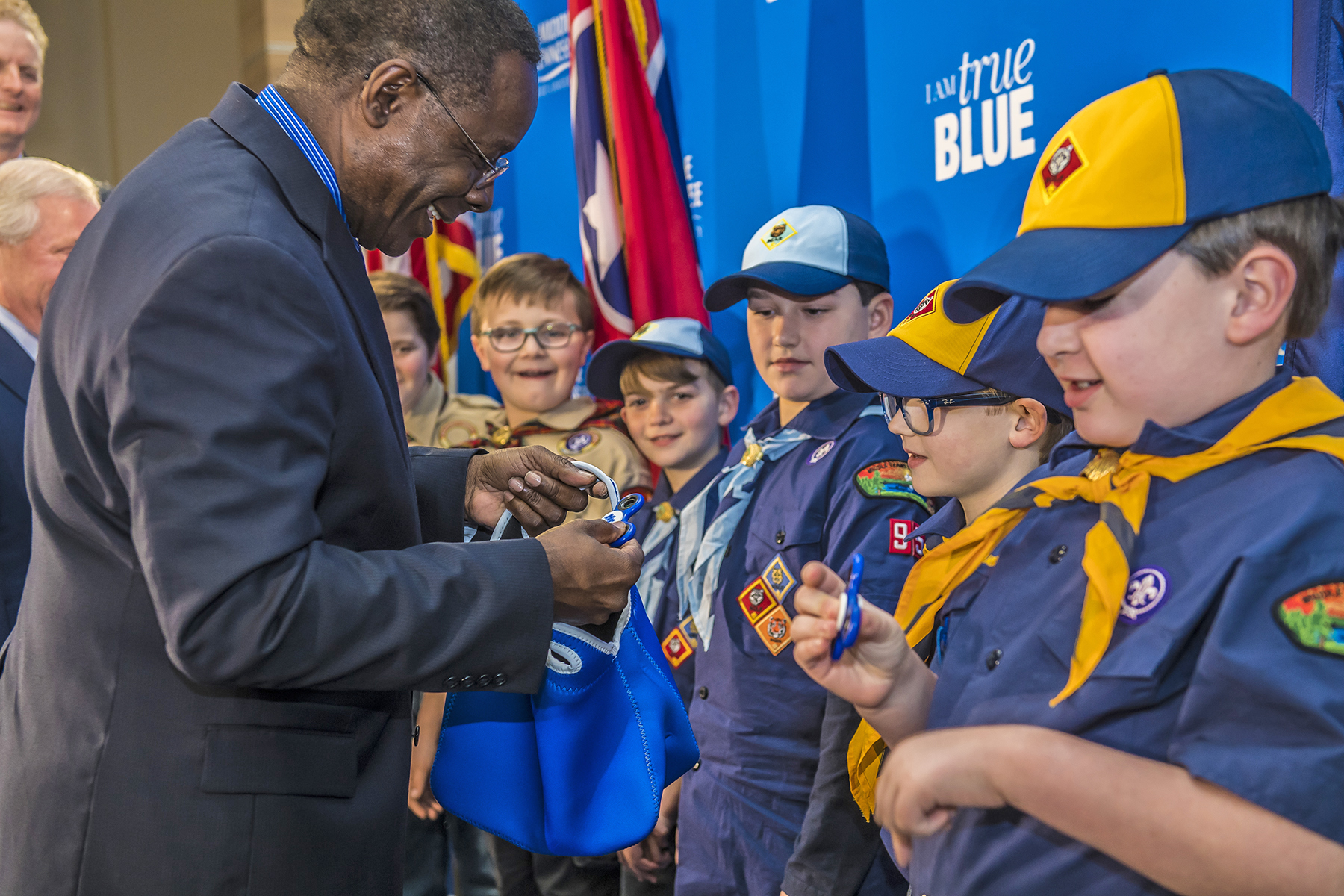 MTSU President Sidney A. McPhee presents tokens of appreciation to Cub Scouts from Scales and Rockvale elementary schools on Wednesday, March 7, following the signing of an agreement between MTSU and the Middle Tennessee Council of the Boy Scouts of America. The signing took place in the Strobel Lobby that connects the Davis Science Building and Wiser-Patten Science Hall. (MTSU photo by Eric B. Sutton)

SCROLL DOWN FOR VIDEO

Middle Tennessee State University and the Middle Tennessee Council of the Boy Scouts of America signed a partnership that will allow the university to be a greater resource for Scouting programs, particularly in science and technology.

J.B. Baker with the MTSU Board of Trustees stated...

And, in doing so, the university will gain an opportunity to reach and recruit prospective students from the council, which serves 37 Middle Tennessee counties and Fort Campbell, Ky.

MTSU President Sidney A. McPhee was joined by former Council President J.B. Baker, now a member of the university's Board of Trustees, and Council Scout Executive and CEO Larry Brown in signing the partnership.

The council, based in Nashville, has more than 18,600 youth and their families participating in programs. It has been fastest growing of 270 nationwide councils the past two years, charting a 24-percent increase since 2015.

"What a great group of potential students for MTSU," McPhee said. "I'd like to see MTSU become the undergraduate and graduate choice for not only the Council's Scouts, but also their parents and leaders who may be looking for a higher education option."

Baker, a Nashville resident and owner and CEO of Sprint Logistics LLC, is an Eagle Scout who has served on various council committees. He now serves as a council trustee.

"It's personal for me," Baker said. "The MOU is great. It's a well-worded document -- allowing the two parties to work together in collaboration and in purpose."

While the partnership signed Wednesday is new, Brown said "hundreds of thousands of Scouts in the Middle Tennessee Council have benefited from a strong partnership with MTSU since 1920."

"The two iconic organizations have partnered on numerous projects and activities that have benefited many generations of Scouts," Brown added.

It puts into play the educational resources of the university's College of Basic and Applied Sciences to engage scouts in science and technology pursuits. The pact is based upon a similar aerospace education partnership the college forged four years ago with the Tennessee Wing of the Civil Air Patrol's cadet program.

The agreement was signed in the Strobel Lobby, which connects the Davis Science Building and Wiser-Patten Science Hall on the Science Corridor of Innovation. Cub Scouts from Scales and Rockvale elementary schools attended the event.

The program has been held since 1991 at MTSU. This year, it was held Feb. 24, with more than 300 scouts, leaders and parents attending.

The President's Silver Column Award recognizes "individuals who go beyond the call of duty to make this campus a place that is conducive to learning and a caring place."

And, before the signing, McPhee thanked and recognized a Basic and Applied professor for his work in forming an Explorer Scout Post devoted to engineering technology. Explorer posts are open to both young men and women, ages 14 to 20, that usually focus on a single career field.

McPhee praised Vishwas Bedekar, an engineering technology assistant professor, for his efforts in creating and sustaining the post, not only "to teach young men and women about science and technology" but also showcase the MTSU campus.

MTSU has more than 240 combined undergraduate and graduate programs. Engineering technology, aerospace and mathematical science are three of 11 College of Basic and Applied Sciences departments.