Public Invited To 9/11 Remembrance At RCSO 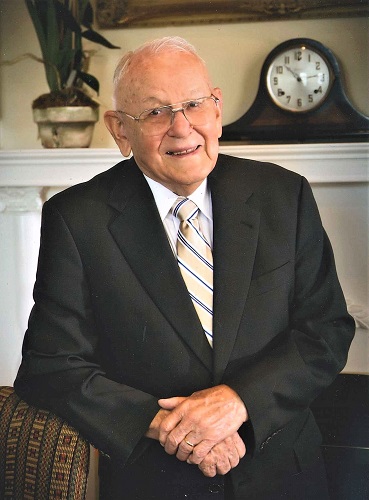 (MURFREESBORO) Bill Allen is the special guest speaker at the 9-11 Remembrance Ceremony set for 9:00 o'clock this coming Wednesday (9/11/2019) morning beside the 9-11 Momument at the Rutherford County Sheriffs Office, 940 New Salem Road. The public is encouraged to attend as we honor First Responders.

Allen, a World War II Navy medic, was one of only 28 sailors who survived when his ship was destroyed in 1944 at Omaha Beach in Normandy, France.

The LST523 Landing Ship carrying 145 U.S. Navy personnel delivering supplies and bringing casualties back suffered damage and sunk during the Battle of Omaha Beach, causing 117 sailors to lose their lives.

Fellow sailor Jack Hamblin picked Allen up in his life raft as the ship sank.

"He saved my life," Allen said, adding he attended Hamblin's funeral Aug. 16 in Baldwin, Miss. Allen is now the only survivor.

Allen, 94, of Murfreesboro, will describe his experiences during the annual 9-11 Remembrance Ceremony at 9 a.m., Sept. 11 at the Rutherford County Sheriff's Office.

After the battle, Hamlin and Allen rescued four other men, two who suffered critical injuries without first aid kits available to help.

They were rescued by another ship and taken to England where they spent six weeks "to get over the shock." He served in the U.S. Navy for three years.

The Rutherford County native graduated from Central High School May 18, 1943, the same day he turned 18 and registered for the draft. He joined the Navy two months later and completed boot camp in Maryland.

He wanted to be in the signal corps but the Navy assigned him as a medic.

"I'm glad they didn't make a cook out of me," Allen joked.

Allen he described himself as a survivor during his years of service. Many of the other military spent time in concentration camps.

"I know I never took anyone's life," Allen remembered. "My job was to save lives."

After serving, Allen returned to Murfreesboro where he met and married his wife, Idalee Tomlinson, 64 years ago. They have two daughters, four grandchildren and five great-grandchildren.

His wife and both daughters accompanied him back to Normandy in 2013 as part of a PBS documentary for the 70th anniversary coordinated by Doug Hamilton. Hamilton arranged for Allen to view underwater the wreckage of the LST523 ship.

They also visited the American cemetery.

"The people of Normandy couldn't do enough for a World War II veteran," he remembered. "I appreciated the opportunity to go back where I had been."

Allen and Ed Phillips of Murfreesboro, who served with him, organized an annual get-together for the sailors on the ship beginning in 1978. He also meets annually with the families of survivors in Pigeon Forge.

When returning to Murfreesboro, Allen worked at Woodfin's Funeral Chapels. He joined Murfreesboro Electric Department where he retired after 32 years. He and his wife traveled for 10 years throughout the U.S.

President Bubba Woodfin of Woodfin's Funeral Chapels hired Allen to respond to death calls and help with visitation for 15 more years before he retired at age 91.

"I'm thankful for the life I have been granted and I appreciate the fact that people want to hear my story," Allen said. "I will tell it the best I can remember from 75 years ago."