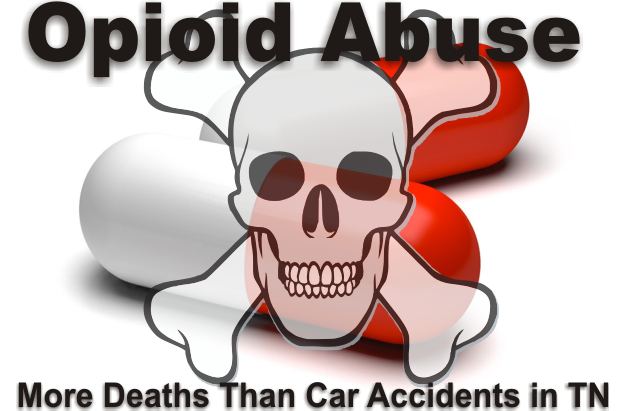 While the criminal justice side of the opioid epidemic has received significant attention, the civil legal issues it has caused have quietly smoldered into a raging inferno, overwhelming legal aid providers, families, social service providers, and courts. The Legal Services Corporation, which funds legal aid organizations across America, recently rolled out a new report on this issue at the Tennessee Supreme Court in Nashville.

The Legal Services Corporation's Opioid Task Force was formed in April 2018. Composed of not just civil legal aid attorneys, but public health professionals, business leaders, judges, and other experts, including Deborah Taylor Tate, the director of the Tennessee Administrative Office of the Courts, the Task Force set out to discover how legal aid organizations could best work with other groups to give people a better chance of overcoming the scourge of opioid use disorder.

"It was creating remarkable problems for our grantees," LSC Board Member Victor B. Maddox said, referring to the dozens of civil legal aid offices dispersed throughout the nation that receive funding from the LSC. "This public health crisis has created and continues to create a civil legal aid crisis for survivors and communities related to issues such as child support, custody, health benefits, domestic violence, elder and child abuse, housing, employment, and others."

The event at the Tennessee Supreme Court brought together a host of different leaders from the legal, public policy, and medical worlds to discuss the report's findings and recommendations in the context of their own organizations' efforts to confront the opioid epidemic.

"Among its many important findings, the report recognizes that civil legal aid providers are in a unique position to address the legal issues facing low income people with opioid use disorder, especially when those providers partner with healthcare providers and other entities, such as youth organizations, social services organizations, faith based organizations, schools, local law enforcement, state agencies, family justice centers, and local care recovery groups," Maddox said. "Only by rallying and coordinating efforts from many sectors of our society will we be successful in turning back the relentless and remorseless scourge that is the opioid crisis."

This is a message that was well-received by many of Tennessee's leaders.

At the event, Tennessee Supreme Court Justice Jeff Bivins noted the particular acuity of the opioid epidemic in Tennessee--where 1,269 died from opioid overdoses in 2017--and welcomed the spotlight on ways that the civil legal aid community could help.

"The work of the LSC Task Force in focusing on addressing our epidemic from the standpoint of civil legal aid issues is of critical importance," he said. "Our state courts have been hit particularly hard by this epidemic and to date much of the focus of our state courts has been on the criminal justice side. But this report will help us to recognize and put resources toward the many issues presented in our civil justice system, particularly with our citizens who are unable to afford legal representation."

He was optimistic that the State of Tennessee could make great strides in the fight against opioids, highlighting the presence of several members of the state's legislative and executive branches in attendance at the Supreme Court building as evidence of "our commitment in Tennessee to the collaboration of all three branches of government to address this epidemic."

Indeed, some progress has already been made in the state, as Tennessee Department of Health Commissioner Lisa Piercey pointed out. The implementation of safe prescribing limits, as well as increases in treatment and support services, the availability of opioid-countering drugs like naloxone, and recovery courts have all succeeded in helping the state's problem with prescription opioids, but newer synthetic opioids like fentanyl are opening up different avenues of danger for Tennesseans.

These even deadlier drugs are causing a spike in death rates for younger and younger Tennesseans, underlining the need for new solutions to helping Tennesseans avoid or overcome addiction.

While there is no silver bullet that can eliminate the opioid epidemic overnight, the Task Force report does offer several strategies that do hold promise for a brighter future.

One path recommended by the report concerns partnerships with faith-based organizations. Tennessee Department of Mental Health and Substance Abuse Services Commissioner Marie Williams has seen how these kinds of partnerships can bring about positive change. That is because she has witnessed the results from her department's Tennessee Certified Recovery Congregations program, which is an outreach program to enlist faith organizations in the struggle against opioids.

Commissioner Williams said that joining up with religious organizations is a way to reach people where they are, rather than expecting them to come to you.

"We know that more people are connected to faith-based communities than they are to any other place in our country," she said.

Partners in the Tennessee Certified Recovery Congregation program are urged to share information about recovery programs, or event to start a recovery support program themselves. They are also taught and encouraged to spread the message that addiction is a disease and not a moral issue.

"Instead of ostracizing or treating people like they're not good or that they're not worthy you embrace them because you learn about this disease and you understand that a lot of the behaviors are not about choices," Commissioner Williams said.

West Tennessee Legal Services Executive Director Catherine B. Clayton shared how her organization has been able to extend help to new people through faith-based partnerships, too.

For instance, West Tennessee Legal Services has partnered with Reelfoot Rural Ministries to assist people affected by opioid use disorder. That relationship allowed West Tennessee Legal Services to find people in need of civil legal aid who were not getting it. Clayton specifically mentioned how the partnership had enabled her organization to help senior citizens in the area.

"We learned that the most pressing legal problem facing those seniors was kinship custody," she said. "What we found was that family members, primarily grandparents, had physical custody of children but no legal custody. And what that means is that when children need to be enrolled in school, they can't be enrolled, when the children need medical care, they can't receive it. The parents are unable to parent their children themselves because they are suffering from addiction, and these grandparents are out there on their own. We help grandparents gain legal custody of grandchildren which allows the grandparents to enroll the children in school, obtain medical care, and obtain child support and benefits."

While the faith-based partnerships have been productive, West Tennessee Legal Services has also chosen to help those impacted by opioids by working alongside treatment and healthcare providers. Entering into these types of medical-legal partnerships is another primary recommendation of the report.

In West Tennessee Legal Services's case, one of those partnerships is with A Mother's Love, a residential treatment program for opioid-addicted pregnant women and mothers that is located in Humboldt General Hospital in Humboldt, Tennessee.

Clayton told the story of one mother who was concerned about her son's biological father. The father was not in recovery and was having trouble with anger issues. West Tennessee Legal Services was able to help her draw up a parenting plan and get an order of protection against the father.

One year later, the mother is drug-free and healthy and has custody of her 1-year-old son. She is also volunteering at a recovery center herself.

"She told me that West Tennessee Legal Services helped her navigate problems that she didn't know how to handle on her own," Clayton said. "She said legal aid services gave her a voice she would not otherwise have had and that civil legal aid provided to her by our firm saved her life."

Dr. David E. Marcovitz, the medical director of the Vanderbilt University Hospital Addiction Consult Service and Bridge Clinic, said that medical-legal partnerships were really about giving addicts as many chances as possible to receive help and begin the road to recovery.

He told the story of one patient, Amanda, a mother of three, who had been admitted to the hospital with a bone infection. She was released, but did not get preapproval for suboxone and continued to inject heroin. She came back in with a severe heart infection and told Dr. Marcovitz that she really wanted to get sober. Unfortunately, her infection was too severe, and she passed away.

Dr. Marcovitz said that at least one-third of patients like Amanda find themselves in the criminal justice system each year and have a history of arrest or probation.

"Her case highlights a number of things," Dr. Marcovitz said. "It highlights that many of our patients encounter missed opportunities for reachable moments to treat their addiction. That is something that unites the medical establishment and the legal system right now."

Dr. Marcovitz said his thinking on these matters was influenced by 4th Judicial District Circuit Court Judge Duane Slone, whose pioneering TN ROCS docket has brought help and hope to many people struggling with addiction who come into contact with the legal system.

"It was he who introduced me to the sequential intercept model whereby at each point in the criminal justice system there are opportunities to touch patients with addiction," he said. "It struck me as I was preparing my remarks that this is really the same issue we are facing in the health care system, which is how do we make sure that every door is the right door? How do we make sure that we take advantage of those reachable moments?"

Vanderbilt University School of Nursing Dean Linda D. Norman suggested one way could be to enlist the help of Tennessee's large nursing population. She said there are 13,295 advanced practice nurses in the state with the power to write prescriptions. It is a standard part of the curriculum now to teach nurses about opioids, addiction, and pain management.

"That is a significant number of people that can be there to really help support you particularly as you're working with your vulnerable populations," she said. "I encourage you to reach out to your advanced practice nurses to really partner with them."

She said that the Vanderbilt University School of Nursing faculty practice has established a medical-legal partnership for older adults. What she has seen from that partnership so far has given her great encouragement about the potential of increased relationships between the medical and legal worlds.

"What we learned is that our advanced practice students didn't know a thing about what legal services were available and what those services were," she said. "The more we did this the more we all learned from each other."

In the end, it will take a number of these relationships to further progress against opioid use disorder in Tennessee and nationwide and to help forestall a worsening crisis due to the rise of synthetic opioids. Yet, Tennessee has many willing partners eager to take on the problem. And it also has a dedicated group of advocates eager to recruit more help.

One of those advocates is Director Tate. She closed the event at the Supreme Court with a call to arms. She said the next stage of the fight against opioids would not be easy; that it took 10 years to get in this mess and may well take as long to get out. But she said those that care about the future can really make only one choice in the face of the epidemic.

"We in this room and many people beyond are soldiers in this fight," she said. "We are committed leaders and committed partners with innovative solutions and proven practices that work. It will be hard work, but if not us then who?"