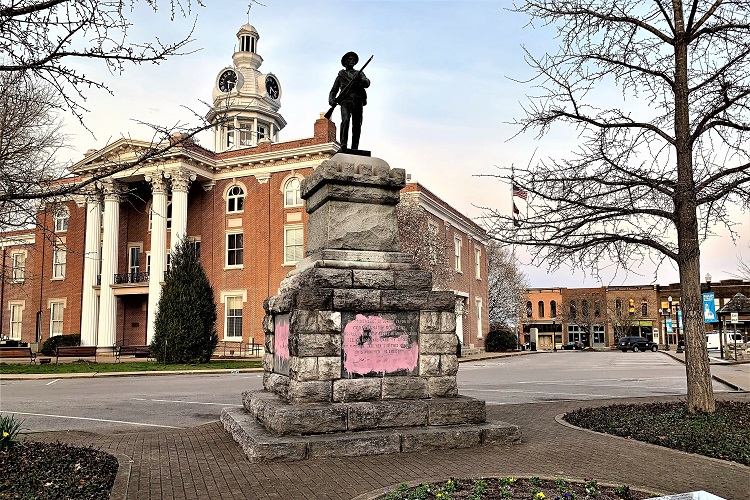 Crime Stoppers of Rutherford County offers a reward for information leading to the arrest of the person who vandalized the Johnny Rebel Confederate monument Tuesday on the downtown square.

The vandal spray painted in pink paint the words "murderer," "Ft. Pillow" and "Coward" on the statue, in an apparent reference to the Battle of Fort Pillow commanded by Lt. Gen. Nathan Bedford Forrest in April 1864 near Memphis.

People who have information may call Crime Stoppers with information at 615-893-STOP between 8AM and 4PM, Monday through Friday.

(LEFT PHOTO) This is a surveillance photo of the suspect's vehicle. Does this look like a friend's vehicle? It could be worth a cash reward. Call CrimeStoppers.

Investigators are reviewing video surveillance tape taken from the areas around the square, said Sheriff's Capt. Britt Reed of the Criminal Investigations Division.

Videotape shows someone wearing a coat and scarf walking around the downtown square for about 10 minutes and approaching the statue at 10:21PM He walks away at 10:22PM.

The person drove away in a dark-colored, compact to mid-sized car.