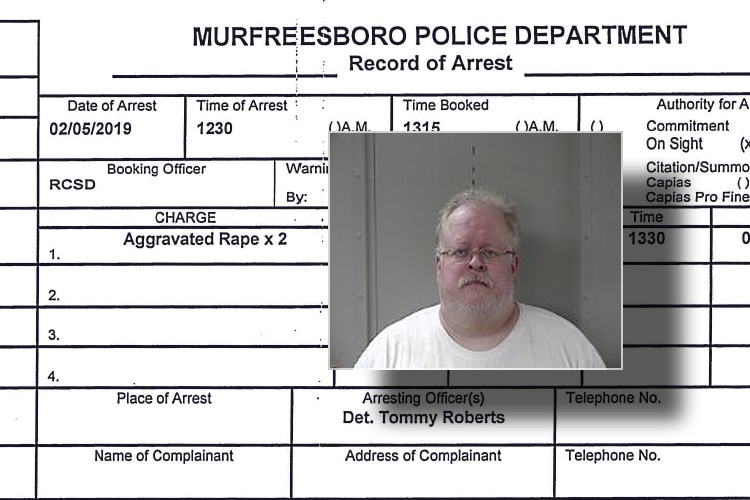 (MURFREESBORO) 48-year old Robert Todd Tarkington of Murfreesboro went before Judge David Bragg on Friday (9/20/2019) and plead guilty to a charge of aggravated rape of a child that dates back to 1988.

Tarkington was placed on supervised probation for 6-years, and must also be on the child sex offense registry, and ordered to stay away from the victim and his family.

The uniqueness of this case was that the crime occurred more than 30-years ago, when the victim was age 12.

Originally when the case was investigated for the first time in 2016, it was thought that charges could not be prosecuted due to the statute of limitations. However, it was later discovered that due to a small window in the law books from the 1980's, an arrest could be made.

Tarkington was charged with two counts of Aggravated Rape based on laws in the 1980's. Tennessee Code Annotated states that T.C.A. 39-2-603 is defined as, "Unlawful sexual penetration of another accompanied" by certain enumerated aggravating circumstances, including that the victim is less than thirteen years of age. T.C.A. § 39-2-603"

As for the victim in this case, it is the same man who has been pushing to eliminate the statute of limitations in felony sex abuse crimes in Tennessee against persons age 13 or younger. WGNS' Scott Walker was 11 and 12 when the abuse occurred.

Walker had held the scars of this crime inside him formore than three-decades, and had not breathed a word to anyone, not even his parents. However, the pain became so great that he decided to go public in an effort to get state laws changed so that other victims would not be prohibited from filing charges.

It took three-years for the Tennessee State Legislature to hear Walker's pleas. During that time, other victims stepped forward, a committee studied the evidence, and on July 1, 2019, new legislation went into effect that eliminated the statute of limitations from that time forward, for any person age 13 or younger, who was a victim of felony sex abuse crimes.

After Friday's ruling against his abuser, Walker praised the Murfreesboro Police Department and especially Detective Tommy Roberts along with Assistant District Attorney Hugh Ammerman for all of their work.

He noted, "At the urging of Detective Roberts, I remained positive that justice would be served."

And it was--it took over 30-years for the victim to release the horrifying secret that was festering inside of him, and then three more years to make a successful fight to change the laws so that others would not prohibited from justice because of a statute of limitations.