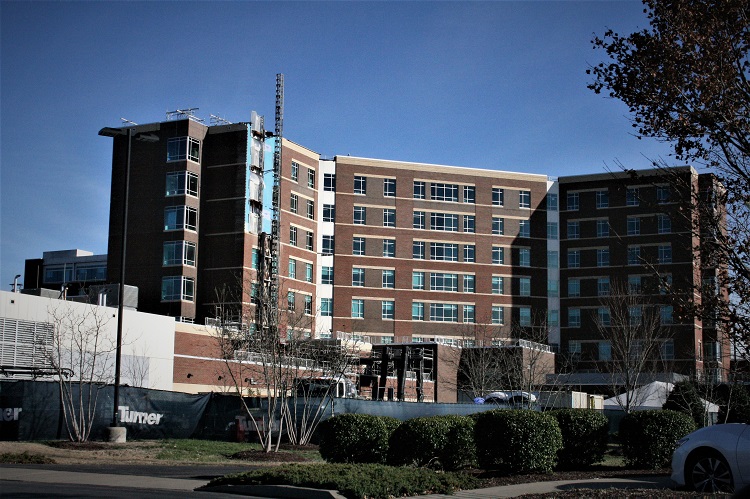 See the vertical tower beside the aqua space? The crane that rested on top was removed this week.

(MURFREESBORO) The old saying "to see the light at the end of the tunnel" is an accurate description for the three-story vertical expansion being carried out at St. Thomas Rutherford Hospital. Officials estimate that it should be completed by this summer.

So that newcomers to the community would know what was happening, Perry explained the project . . .

Three additional floors and 72 beds are being added to the west patient tower of the hospital. That totals an additional 60,000 square feet.

St. Thomas President and CEO Gordon Ferguson said, "As the Rutherford County community continues to grow, it is essential the hospital expands to meet the healthcare needs of the growing population, and we are honored to be a community partner throughout this time of growth."

The vertical expansion will include finishing the sixth and seventh floors for immediate use, while the eighth floor will be shelled in for future expansion, when needed. The expansion also includes a two-story addition with ground level support space, storage space and four additional operation rooms on the second floor.

What area of treatment will be assigned to each of the new floors and will there be new surgical suites?

Since this conversation was a part of a local talk show on WGNS, a listener said parking had become a challenge during the construction period, and would that improve as summer got closer?

By the way, that crane was removed a few days ago and parking should begin to improve . . .

She noted that the Foundation's capital campaign was in its wrap-up stages, and that a little over $10-million had been raised. Perry indicated that small and large donations were being made by a cross-section of the community . . .

This information was taken from a talk radio show on WGNS, and a listener asked her to explain the difference between a faith-based not for profit hospital, and a for profit medical complex . . .

If you have been inside the lobby of the hospital, you noticed the front two elevators were boarded-up and closed. Perry commented . . .

When asked if the opportunity had passed to name an area in the hospital after a loved one, she commented . . .