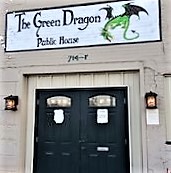 (MURFREESBORO) Members of the Tennessee Equality Project's Rutherford County Committee and allies will gather at 6:30PM Monday (4/1/2019) night in the Green Dragon Pub in Murfreesboro to work on plans to defeat what they describe as "six anti-LGBTQ bills before the Tennessee General Assembly".

On this coming Tuesday evening, the Tennessee House will vote the same evening on HB863 by Rutherford County legislator, Rep. Tim Rudd, that requires the state to work with private adoption agencies that discriminate against prospective parents on the basis of religious or moral objections. The bill is up for a vote in the Senate Judiciary Committee on Tuesday afternoon. Senator Dawn White of Rutherford County is a member of that committee.

Also up for a vote this week is HB1274 by Rep. Andy Holt that requires the state to defend and pay the court costs of school districts sued for engaging in anti-transgender student discrimination.

Participants will write postcards to their legislators on these bills and learn other ways to express their opposition.

Founded in 2004, TEP is a statewide organization working for the equality of LGBTQ people in Tennessee. 2019 marks the fifteenth year that TEP has held Advancing Equality Day on the Hill events. Learn more at TNEP.org.