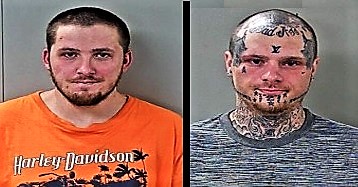 (LASCASSAS, TN) Deputies from the Rutherford County Sheriffs Office have arrested two men and charged with them multiple vehicle burglaries.

26-year old George Adam Parker of Almaville Road in Smyrna and 29-year old Steven Lokey of Manchester, were each charged with one count of auto burglary and three counts of attempted burglary.

On March 13, 2020, sheriffs deputies were dispatched to a call about a suspicious vehicle and people in the Farmington subdivision near Lascassas.

Gonzales and Detective Kyle Norrod obtained a warrant to search the truck and recovered property stolen from vehicles owned by Farmington subdivision residents.

Detective Gonzales said, "We recovered a couple of computers, a Louis Vuitton wallet and children's clothes."

The vehicles were unlocked. Residents are reminded to lock vehicles to prevent burglaries.

Detectives linked one of the suspects to an unrelated vehicle burglary on March 4 in the Southridge subdivision near Veterans Parkway.

Parker was released on $12,500 bond. A hearing is set April 29 in General Sessions Court.

Lokey is being held on $22,000 bond at Rutherford County Adult Detention Center. A hearing is set April 2 in General Sessions Court.
DISCLAIMER: All suspects are presumed innocent until proven guilty in a court of law. The arrest records or information about an arrest that are published or reported on NewsRadio WGNS and WGNSRadio.com are not an indication of guilt or evidence that an actual crime has been committed, but instead dealing with the public record of arrest.
Read more from:
News
Tags:
auto burglary, George Adam Parker, Lascassas TN, RCSO, Steven Lokey, WGNS
Share: