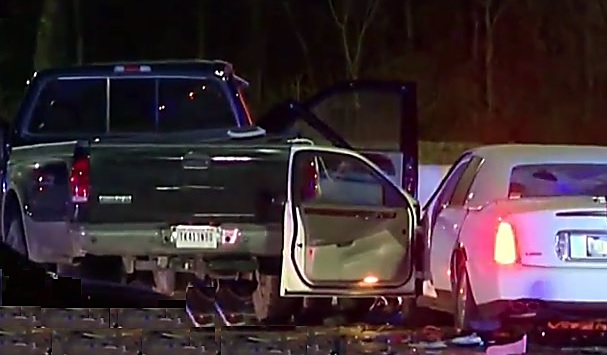 A two-vehicle crash around 3:30 Monday (3/13/2017) morning took the life of a 44-year old Indiana man who got out of his wrecked truck on I-24 at Sam Ridley Parkway in Smyrna. It was dark outside, and Christopher Kimbrough was hit and killed by an oncoming vehicle.

Trooper Andrew Troxell reports that Kimbrough's 2005 Ford F-350 pickup was traveling eastbound (toward Chattanooga) when his truck ran off the right side of I-24. He overcorrected, struck the median wall and came to rest perpendicular across the interstate. Kimbrough got out of the truck and walked to the passenger side.

It was dark, more than three-hours before the sun came out, and the driver of an oncoming 2005 4-door Cadillac did not see the Kimbrough until it was too late to stop.

84-year old Raymond Rinkenberger of Mackinaw, Illinois was injured and taken to the ER at StoneCrest, but later flown by air ambulance to the Vanderbilt Trauma Center. He was the driver of the Cadillac.

No charges are being considered in this deadly crash. The call came into 911 at 3:27 Monday morning.