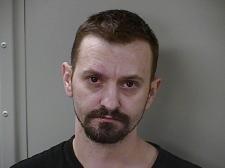 A Murfreesboro man by the name of Christopher A. Barnes will soon face the courts on multiple charges for alleged sexual acts involving a child.

The subject, who goes by the nickname of "Chris" Barnes, was arrested on May 20th and will file a plea with the courts on December 19th.

The local resident who has long called Murfreesboro home, is currently behind bars at the Rutherford County Adult Detention Center. He was arraigned in court in November and will file his plea on December 19, 2016.

Barnes is represented by a public defender and is being held under a $100,000 bond.