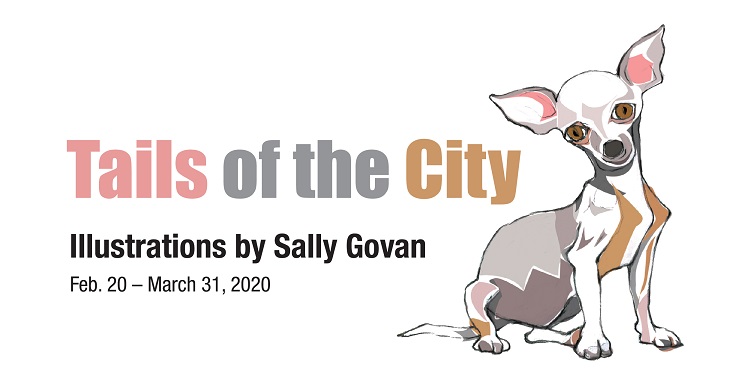 (MURFREESBORO) The public is invited to the Tails of the City art exhibit reception featuring works by Sally Ham Govan this coming Sunday, February 23 from 2:00 until 4:00PM in The Gallery at The Washington Theatre in Patterson Park Community Center, 521 Mercury Boulevard.

"I have two distinct styles: charcoal drawings of the dog in lieu of the human figure, and colorfully illustrated scenes of urban life drawn with a stylus on a computer tablet," said Govan. "I was afraid of dogs until I started drawing them and turned that story into a children's picture book."

The exhibit runs from February 20 through March 30 and admission is free.

Govan is an illustrator, graphic designer, educator and editor. She draws dog portraits on commission, and she illustrated a children's book as part of her master's thesis. Govan received an MFA in illustration from the University of Hartford and a BFA in studio art with concentrations in drawing and graphic design from the University of Tennessee. She teaches graphic design, typography, and 2-D computer illustration at Cumberland University She has designed and edited publications and marketing materials for Jones College of Business at MTSU, art directed national magazines for Whittle Communications, designed special publications for the Knoxville News Sentinel, and consulted as a freelance designer and editor.

Again, the reception is this coming Sunday from 2:00 until 4:00 that afternoon at the Patterson Community Center.