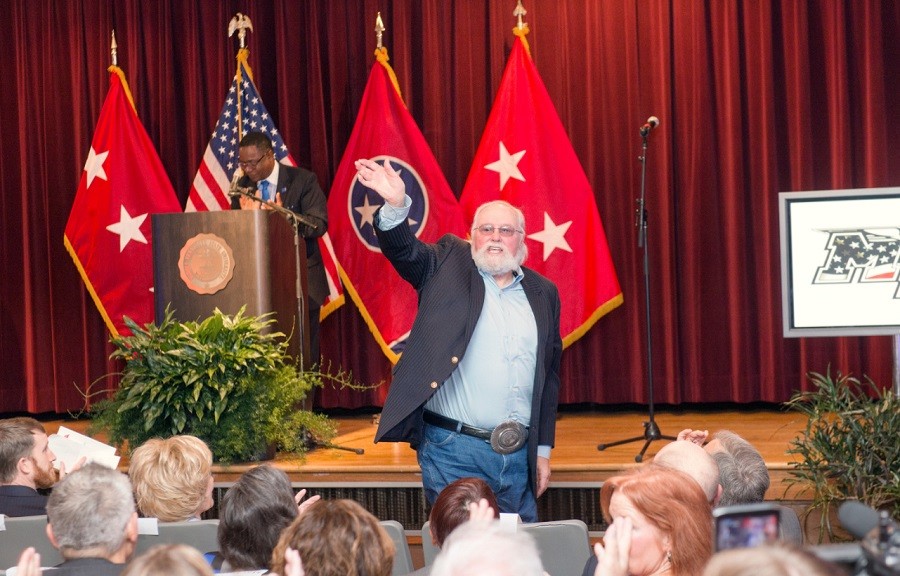 Statement from President Sidney A. McPhee regarding the death of Charlie Daniels:

Middle Tennessee State University today grieves the passing of Charlie Daniels, a dear friend and great patriot, whose devotion to the men and women in our Armed Forces helped create and sustain the Veterans and Military Family Center on our campus that bears his name. The entire university community joins us in extending our deepest sympathy to his wife, Hazel, and his family.

My wife, Elizabeth, and I have lost a dear friend, with great heart and whose laugh filled a room. We will miss our dinners together, his visits to campus, hearing him sing and his tireless advocacy and hard work on behalf of our student veterans.

Charlie’s love of life and country was radiant and inspiring. And we at MTSU shall work every day to sustain and extend his legacy through the good works of the Charlie and Hazel Daniels Veterans and Military Family Center.

Charlie will live on, not only through his music but also through the lives lifted through his generosity.

It has been my privilege over the last five years to work closely with Charlie Daniels and his nonprofit organization, The Journey Home Project, in support of our veterans as they transitioned out of uniform.

I recall vividly the energetic presence of Charlie and Ms. Hazel as we cut the ribbon to open MTSU’s Veterans and Military Family Center in November 2015. Based upon Charlie's legendary patriotism and unrelenting support to our military, we renamed and dedicated this unique transition center to Charlie and Ms. Hazel in August 2016.

Charlie's support will forever continue and live at MTSU as veterans and their precious military families nationwide seek the transition assistance of the center.

Our prayers are sent to surround the family and friends of our beloved Charlie Daniels, my true friend.

Statement from Beverly Keel, dean of the MTSU College of Media and Entertainment

I was just devastated to hear of the passing of Charlie Daniels, who led not only a Hall of Fame career onstage, but a Hall of Fame life offstage. He was a strong willed, strongly opinionated man of character and courage who leaves behind a body of work that we can now turn to for help in consoling our broken hearts.

Charlie loved God, America, country music, his family, the U.S. military and the people of Tennessee. He dedicated his time, talent and money to improving the lives of his neighbors and the soldiers he so admired. He was a big man with a larger-than-life personality and an even bigger heart.

During my lifetime, he has always been a towering figure in Middle Tennessee, yet he remained grounded and approachable as he went about his days living in Mt. Juliet and worshipping in Murfreesboro. He was a horse-loving, gum-chewing, cowboy hat-wearing superstar who always remained one of us, no matter where in the world he traveled.

Charlie cared deeply about so many things, and he invested his time and resources into improving the lives of others. As he said, ““I’m a Christian and the Bible says, ‘To him who much is given, much is required.’ I can never give back a fraction of what I’ve been given.”

Statement from Dean Keel, former chair of MTSU’s Department of Recording Industry, on the impact of his career:

My mind is racing with memories of Charlie, who wowed the world with his charismatic and enthusiastic performances and irresistible smile. His music served as the bridge between country and Southern rock, with a little bluegrass and gospel thrown in for good measure.  His unique sound found in songs like “Uneasy Rider,” “Long Haired Country Boy,” “In America” and “The Legend of Wooley Swamp,” as well as his signature song, “The Devil Went Down to Georgia,” allowed Charlie to find success in the rock and pop charts. Those multi-generational fans from other genres followed Charlie back to his home in country music.

I can’t overestimate how important his unforgettable Volunteer Jams were to Nashville. Charlie hosted the city’s annual musical homecoming, inviting his friends from across the nation and musical spectrum to create spontaneous magic with him. For instance, the surviving members of Lynyrd Skynyrd reunited for the first time in 1979 to perform at Volunteer Jam V.

Charlie was humbled and touched when the International Entertainment Buyers Association surprised him at the Grand Ole Opry with news that they had created a scholarship in his honor at MTSU. That inspired him to create his own scholarship at MTSU and become increasingly involved with our activities here, which ultimately led to the creation of the Charlie and Hazel Daniels Veterans and Military Family Center.

His influence on our campus and in the lives of our student veterans will remain for generations.

The Charlie and Hazel Daniels Veterans and Military Family Center at MTSU enables the 1,000-plus student-veteran population on campus to have a one-stop shop to meet a variety of academic needs. The center’s goal is to help current military, veterans, and family members move from military to college, then from college to a successful career.

Located in the heart of campus, the 3,200-square-foot center is a place for student veterans to study, gather and get help from fellow veterans, who serve as peer advisers and sponsors. The Transitioning Home Office within the center assists student veterans — or any student — in making the transition from college to career.

The Daniels Center is the largest and most comprehensive veterans center on any Tennessee campus. Daniels described the honor of his name upon MTSU’s veterans center as greater than his selection in the Country Music Hall of Fame.

The center opened in 2015 and was renamed in the Danielses' honor a year later for their longtime support for veterans through the nonprofit foundation The Journey Home Project that Daniels co-founded:

Daniels had been the featured host of the MTSU Veteran Impact Celebration, a fundraiser for the Daniels Center held in 2018 and 2019 that raised more than $300,000 total. This year's event was canceled because of the coronavirus pandemic.

In 2013, the International Entertainment Buyers Association established an MTSU scholarship in honor of Daniels with a $25,000 endowment. More info: https://mtsunews.com/charlie-daniels-scholarship-established/

In 2009, MTSU presented him with the Joe M. Rodgers Spirit of America Award, an honor presented to a businessperson who has demonstrated the best of the spirit of America through significant contributions in government, education and/or civic and charitable organizations.

Daniels was a frequent visitor to campus, visiting Recording Industry classes and signing books he published:

And, on March 2, Daniels joined MTSU President Sidney A. McPhee, Predators President and CEO Sean Henry and Huber to announce the creation of The General’s Fund. Henry said the Predators will help MTSU raise money to support military-connected students who struggle financially to reach their higher education and career goals. Story and video:https://mtsunews.com/mtsu-predators-announce-generals-fund-partnership-2020/