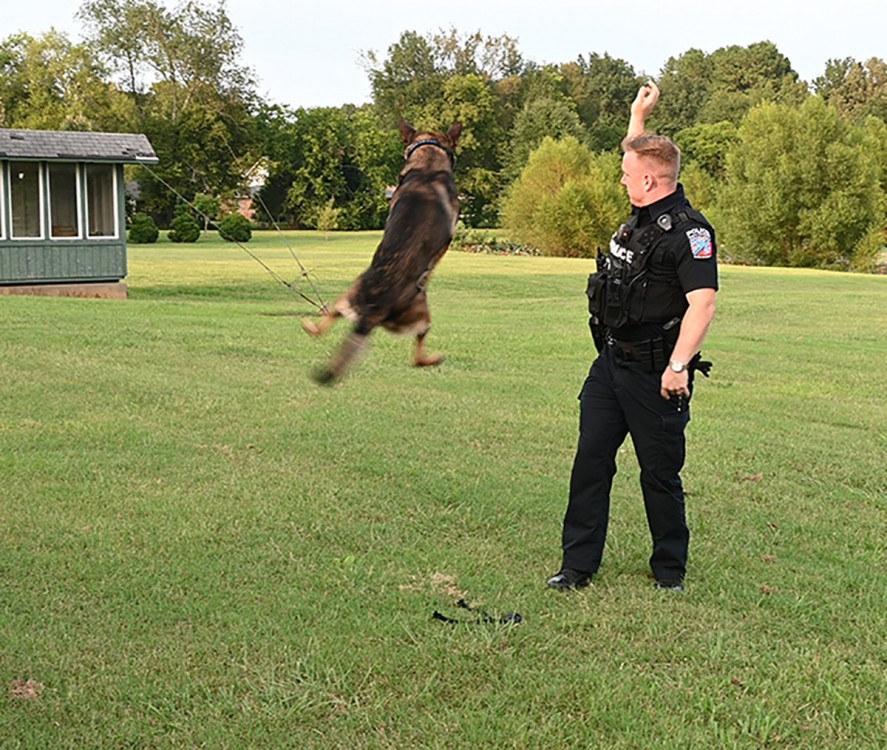 MURFREESBORO, Tenn. — For MTSU Police’s K9 handler and patrol specialist Zachery Brooker, the “loyalty” he receives from his K9 Bobby “can’t be compared.”

This month marks the dog’s first year of service for the campus police department, and Bobby and Brooker have been “very fortunate to have a really good first year” and that the other officers “love having Bobby here,” Brooker said.

ADVERTISEMENT
Bobby is a 2-year-old German shepherd and Belgian Malinois mix. He met his MTSU handler for the first time at K9 training school in Smyrna Beach, Florida.

Brooker, originally from Michigan, spent “all the years that mattered in Tennessee.” With the department since May 2017, he “came here with the intention of wanting to really give back to a department that has served the community that I grew up in.” He has personal ties to the university, knowing several people who attended MTSU in the past, who attend currently and who will most likely attend in the future.

The K9 position attracted him because it was an opportunity to serve his department with “everything that I’ve got.” Brooker had been a member of the military and graduated from the Walters State Police Academy before meeting Bobby, but K9 training was “seriously the hardest thing I’ve ever done,” which he doesn’t say to “deter anybody.”

In addition to the dog’s capabilities of tracking others and alerting to the presence of illicit substances, the K9 adds an important safety aspect to the community: suspects are more compliant because of Bobby’s presence, and he can “defend and protect both officers and civilians,” Brooker said.

The biggest lessons that Brooker has learned from his first year as a K9 handler are “patience” and “realistic expectations.” The dogs aren’t “heat-seeking missiles.” The public sees only the snapshots of success: the tracked and apprehended criminal or the sniffed out bag of drugs.

Every new experience is a learning opportunity for a brand new K9. Brooker’s had to teach Bobby everything from the basics like potty training to the unexpected like helping him get over an uneasiness with an empty bathtub.

It can be easy to become overwhelmed, but Brooker has mastered the art of taking “a deep breath” and focusing on getting better every day.

He encourages the other officers to get to know their furry coworker. They’re always welcome to play and spend time with Bobby because the stronger the relationships are between Bobby and his human team, the more successful they’ll all be in the field, he said. The dog feeds off of everyone’s energy. “It’s what he lives for,” said Brooker, “that ‘good boy,’ that praise,” and his toys, of course.

What are Bobby’s biggest lessons from his first year on shift? Learning to “trust” Brooker … and also to “not pee in the house.”

Bobby’s also had three successful tracks in year one.

One winter night, his keen sense of smell and training helped safely reunite a child, wandering out in the cold, with his mother. Most recently, he helped his department track down and apprehend a suspect. It’s Brooker’s favorite moment to date.

In the past, Bobby has aided on tracks for the Murfreesboro Police Department or the Rutherford County Sheriff’s Office. This one “was our track,” explained Brooker. “It was a success for (MTSU).”

Another officer on the scene, Lt. Andrew Bennett, explained that the team followed Bobby until the dog stopped and gave his proximity alert. Bennett used his flashlight to locate any sign of the suspect in the tree line and brush, but he couldn’t detect anything. Brooker commanded Bobby to bark, and the suspect then identified himself. The team relied on Bobby and his canine senses for that safe apprehension.

Brooker’s job doesn’t stop when he clocks out. Bobby comes home with him. The dog’s lifestyle is like that of an athlete’s: healthy treats like carrots and apples, hydration, rest and recovery and plenty of training and exercise. Movement starts first thing in the morning when Brooker takes Bobby out for a half hour game of fetch.

Though Bobby lives like Brooker’s pet at home, the officer cautions against the general public adopting these dogs. Unless a person is extremely active and ready to dedicate long hours and attention to it, the breed is best suited to the working life. “They’re not great lap dogs,” he said.

Being the department’s sole K9 handler also means long hours at work. “There are days when it’s tough, you’re tired,” said Brooker. “There’s been more times than not with him where because of his capabilities, he’s had to stay late.” At the end of the day, though, he continued, “it’s always worth it to see the officers’ reactions to him doing his job well.”

The K9 and the campus community

When he’s not in super-dog mode, Bobby adores the attention he gets from members of the university community.

So, if you see him on campus, “feel free to approach,” explained Brooker. Then, as with all dogs, always ask if it’s OK to pet.

This good boy has been out to several campus events where people “love on him,” and all of his interactions have been positive.

Brooker looks forward to many years of working hard with his faithful companion and coworker by his side. “We work really hard together, and we do it for the campus community,” said Brooker. “I can’t express enough that it’s for them. This department really cares about the community it serves.”
Tags: K9 MTSU Murfreesboro officer police state Tennessee TN
Sections: News