SECOND Suspect Sought in Murder of Nurse on Interstate 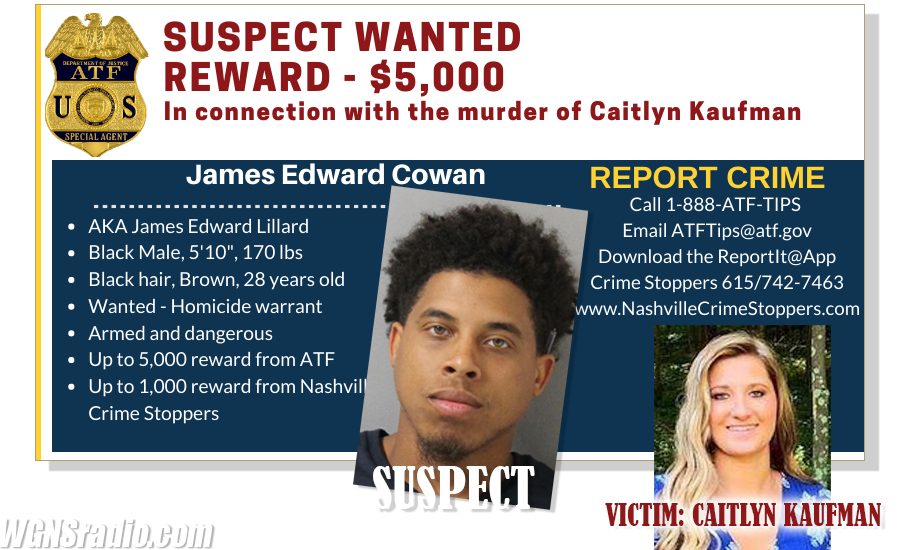 A second person is being sought by Nashville Metro Police in the shooting death of Caitlyn Kaufman on Interstate 440. Kaufman was the woman who was on her way to work when she was shot and killed.

ADVERTISEMENT
28-year-old James Edward Cowan is now wanted in Kaufman's murder that took place on her drive to Saint Thomas West Hospital in Nashville. Kaufman worked at the medical facility as a nurse in the Intensive Care Unit.

The arrest warrant issued for Cowan charges him with criminal homicide. However, he has yet to be caught and there is a reward for his arrest.

Previously captured for her murder was 21-year old Devaunte Lewis Hill. He has been charged with criminal homicide.

Kaufman lived in Lebanon, Tennessee. Her Mazda SUV was shot at least six times as she headed in to work to make her 7PM shift on December 3, 2020. Of the shots fired, there was only one that struck and killed her, according to information from the medical examiner's office.

The case remains active as police throughout Middle Tennessee are on the lookout for the second suspect who has been named as James Edward Cowan.

If you have any information that could help authorities, you can remain anonymous and be eligible for a cash reward by calling CrimeStoppers at 615-742-7463.
Tags: Caitlyn Kaufman Devaunte Lewis Hill I-440 James Edward Cowan.James Cowan Lebanon murder Nashville Saint Thomas Tennessee TN wanted West
Sections: News