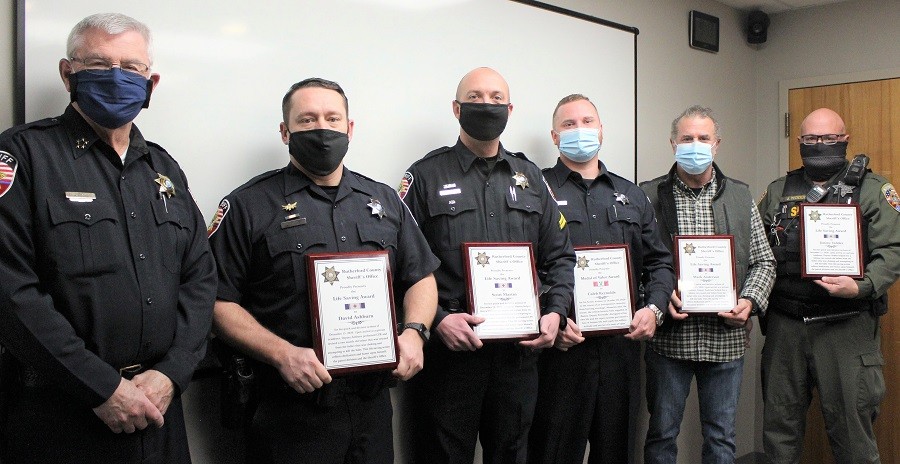 Another deputy who removed a driver from a burning car also received the Medal of Valor Award from Sheriff Fitzhugh.

Sheriff Mike Fitzhugh said he was proud of the deputies who received awards and thanked their families who attend the ceremony.

“What you do exemplifies the men and women of this department,” Fitzhugh said to the recipients.

Patrol Sgt. Bryant Gregory, who nominated the deputies for the award, reported Martin, Anderson and Tedder responded to find the father allegedly was choking the baby who was lifeless and blue Dec. 15 at home. Deputies freed the baby from the father.

“Cpl. Martin was able to start CPR until the baby took a breath and cried,” Gregory reported.

Martin handed the baby to the mother and helped other deputies detain the father. Ashburn arrived just as the baby stopped breathing a second time and performed CPR on the baby until he breathed again.

“If not for the lifesaving actions of these deputies the baby would have surely died,” Gregory reported. “Their quick response, along with their selfless actions, helped save his life. These deputies should be commended for their heroic actions.”

Sgt. Jamie Holloway, who nominated Reynolds, said Reynolds responded to a crash where the driver was still inside the vehicle Oct. 28 on Bivens Hill Road. The undercarriage of the vehicle was on fire.

“Deputy Reynolds quickly, selflessly and without hesitation made entry into the burning vehicle and removed the unresponsive driver,” Holloway reported.

Deputy Jacob Beu arrived on the scene and assisted Deputy Reynolds by removing the unresponsive driver further away from the burning vehicle. Moments later, the vehicle became fully engulfed in flames.

“If not for the quick, brave and heroic actions of Deputy Reynolds, the driver would have perished in the fire,” Holloway said.

The driver was alert and talking with Rutherford County Emergency Medical Services paramedics before being transported to the hospital.

Reynolds disregarded his own safety to save a citizen’s life, the sergeant said.

Deputy Chief Egon Grissom thanked families for their support, too.