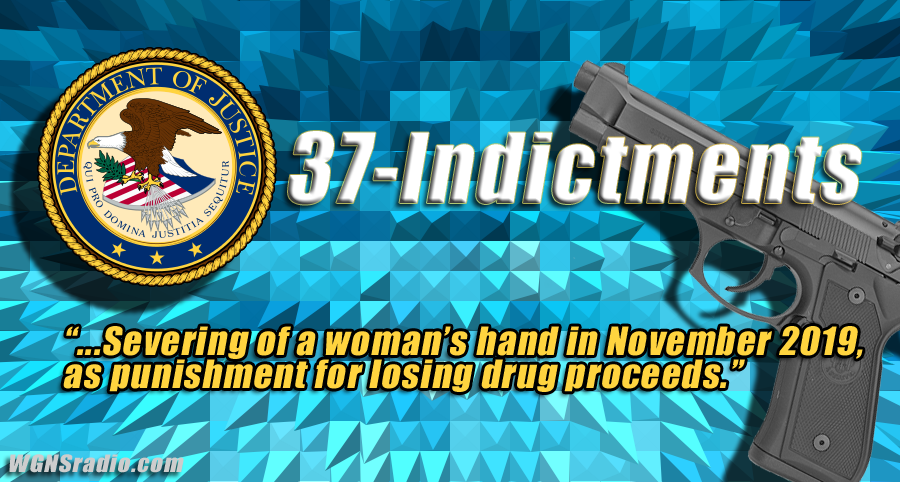 Four Rutherford County residents are tied to a federal indictment that was unsealed this past Friday.

According to the U.S. Department of Justice, the indictment charged 27 individuals with a host of federal crimes relating to a large-scale conspiracy to distribute heroin, methamphetamine, fentanyl and cocaine. The announcement was made by acting U.S. Attorney Mary Jane Stewart for the Middle District of Tennessee.

ADVERTISEMENT
Eight others were charged in separate indictments last week and two other individuals had previously been charged.

The U.S. Attorney’s Office reported that the conspiracy has been ongoing since as early as 2018 and was orchestrated from within the Tennessee State Prison system by Humberto Morales, aka Pelon, 29, of Columbia, Tennessee, who has been incarcerated since 2014.

Other charges resulting from this investigation include kidnapping, money laundering, making threats by electronic communication, and firearms violations.

The Tennessee Department of Correction (TDOC) previously sought the assistance of federal law enforcement to address criminal activity occurring within the prison system.

The resulting indictments and other court documents allege that the organization had ties to MS-13, Sur-13, and other street gangs and distributed tens of thousands of fentanyl-laced pills; multiple kilograms of fentanyl and heroin; over fifty pounds of methamphetamine, which was often 95-99 percent pure (commonly referred to as “ice”); as well as smaller quantities of cocaine and marijuana.  Court documents also allege that this well-orchestrated conspiracy is linked to at least one murder, horrific assaults, and multiple other crimes of violence.

Morales is alleged to have been the leader of the organization and routinely obtained contraband cell phones which were smuggled into the prison facilities where he was housed.  Morales used these phones and encrypted communication services such as WhatsApp to orchestrate activities of the drug distribution network, order acts of violence against individuals, and to direct the flow of cash from drug sales between middle Tennessee and Mexico.  Drug proceeds were also used to pay co-conspirators, to pay for drug shipment expenses, bail and legal services, and to purchase firearms.

Notable acts of violence associated with the conspiracy include the severing of a woman’s hand in November 2019, as punishment for losing drug proceeds.  During this incident, the woman was kidnapped, driven around Nashville, and then a hatchet was used to chop off one of her hands, before leaving her lying on the street.  This incident was recorded on video and sent via encrypted communication on a cell phone.  Another incident involved a hitman for the organization who, at the direction of Morales, cut off part of his own pinky finger to prove his continued loyalty to the organization after he lost or stole a small quantity of drugs.

The indictment also charges Morales and Kim Birdsong, 49, of Nashville, with using facilities of interstate commerce (cellular telephones and encrypted messaging services) in an effort to murder a person known as “Pancho”/”Mekaniko,” and that cash, drugs, and the cancellation of a pre-existing drug-related debt were to be provided as payment for that murder.   That person was then shot multiple times on April 4, 2019, in Nashville, but survived.

As a result of this investigation, law enforcement seized more than $160,000 in cash drug proceeds and multiple firearms, including a handgun which had been illegally modified to operate as a machinegun, and an operational firearm silencer.

Many of the defendants were charged by criminal complaint as the investigation progressed and have been in custody awaiting indictment.  Others were arrested Friday and are in federal custody.  Two others are fugitives, including Morales’ girlfriend, Erika Vasquez, 32, aka Chula, of Memphis and Columbia, Tenn., and Magdiel Pina Ramirez, aka Big Show, 28, of Mexico.  Ramirez is the person described above who served as a hitman in Mexico and cut off part of his own finger.  Both are currently believed to be in Mexico.

Others charged in this investigation are:

Jennifer Montejo, charged in the conspiracy in December 2019, was sentenced on Friday to 25 years in prison.  Montejo was arrested at a Nashville bus station as she returned from California after travelling to Los Angeles days earlier.  At the time of her arrest, four kilograms of  fentanyl, and a kilogram of heroin were discovered in Montejo’s luggage.  She pleaded guilty in November 2020.

Acting U.S. Attorney Mary Jane Stewart praised the tremendous efforts of the law enforcement agencies involved in this extensive investigation and noted the unparalleled cooperation between the agencies and the significant resources contributed by the Tennessee Department of Correction and its desire to reduce criminal activity by its inmates.

If convicted, most defendants face a minimum of 10 years in prison and many face up to life in prison.