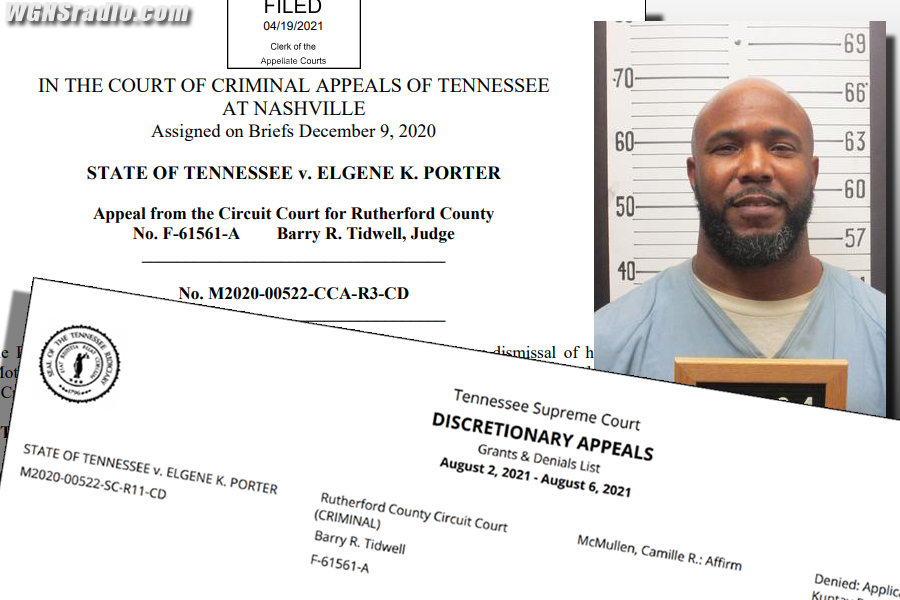 The Tennessee Supreme Court has denied an appeal filed by a convicted rapist in Rutherford County. The denial was officially filed this past week, after the case in question was previously denied by the lower court of Criminal Appeals of Tennessee at Nashville, which denied the request filed by Elgene K. Porter on April 19, 2021.

Porter, who previously lived on Center Pointe Drive in Murfreesboro, was convicted for the rape of a woman whose two-year-old daughter was nearby as the attack took place. Evidently, the mother who was in her mid-twenties at the time, was attacked at gunpoint and bound in duct-tape in her own home by Porter and two accomplices.

Court documents show that Porter and two accomplices ransacked the home of the Smyrna victim after breaking into it, an ordeal that lasted over three hours.

In his original appeal filed before the Court of Criminal Appeals, Porter claimed that he was illegally sentenced as a violent offender and that he was entitled to be sentenced as a Range I, Standard Offender with a thirty percent release eligibility. After the appeal was denied this past April, the case went to the Tennessee Supreme Court where Porter reiterated his his claim of being wrongfully sentenced.

In April, the State dismissed Porter’s appeal because he failed to state a colorable claim for relief under Tennessee Rules of Criminal Procedure 36.1. After the appeal was officially denied 4-months ago, Porter filed an appeal with the Tennessee Supreme Court, which was denied this past week (August of 2021).

43-Year-old Elgene Porter won't be eligible for release until October 13, 2065. At the point, he will be 88-years-old. His sentence will officially end on Christmas Day, year 2069 when he is 92-years of age.