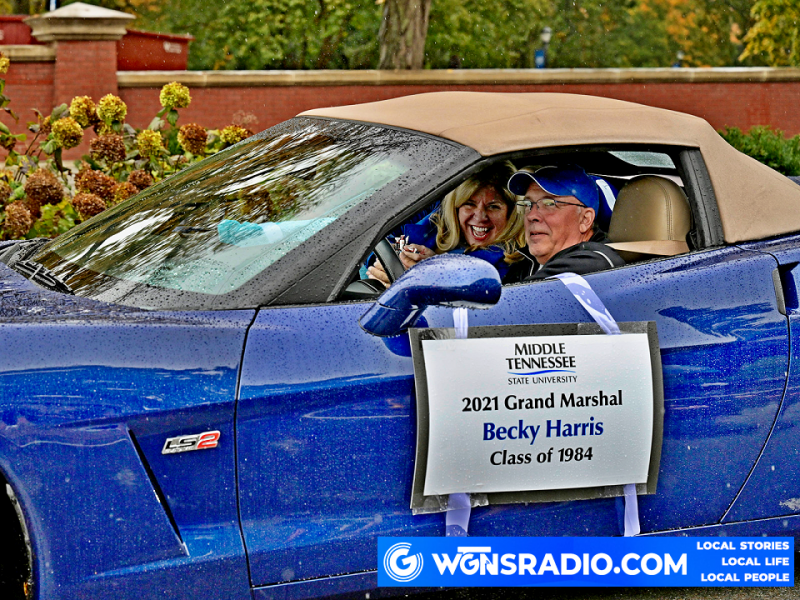 (MURFREESBORO)  Homecoming week at MTSU is wrapping-up, and despite the rain--everyone has had a great time reliving memories with former classmates. Then the afternoon gridiron class between the Blue Raiders and Southern Miss.

ADVERTISEMENT
The Blue Raiders compiled five takeaways on defense over the course of the game, sacking Golden Eagle QBs seven times and making 14 tackles for loss while holding Southern Miss to just 234 yards from scrimmage.

After falling behind 7-0 early in the first quarter, Middle Tennessee's defense responded in a big way, as Jordan Ferguson drilled the Southern Miss QB on the blitz to force a fumble. Ja'Kerrius Wyatt fell on the loose ball to give the Blue Raiders the ball in Golden Eagles territory.

On the ensuing drive, Mike DiLiello was brilliant in relief of the injured Chase Cunningham, throwing a dart on fourth down to DJ England-Chisolm to keep the drive alive, then scampering in a zone read for a six-yard touchdown run. Zeke Rankin's PAT was good to tie the game, 7-7.

After the defense forced the Golden Eagle offense off the field, Ralph Mency came up huge on special teams, blowing up the two-person wall in front of punter Mason Hunt and volleyball blocking the kick. Tra Fluellen scooped up the ball and sprinted to the endzone, giving MT a 14-7 lead at the end of the first quarter.

The Blue Raider defense came up big in the turnover game once again on the next drive, with Deidrick Stanley II coming in hot on a third and long blitz and hit Golden Eagle QB Jake Lange on the blindside again, knocking the ball loose for Jordan Branch, who recovered the fumble and ran in back 29 yards for another Middle Tennessee Scoop and Score, giving the Blue Raiders a 21-7 lead that would hold until halftime.

After Southern Miss would chip back with a 39-yard field goal to make it 21-10, Middle Tennessee drove 81 yards down the field, highlighted by a 40-yard catch from Jarrin Pierce, and capped off with a 14-yard touchdown run from DiLiello, who followed in his excellent wideout blocking down the right sideline for the score to make it 28-10.

The defense would get their second touchdown of the afternoon late in the third quarter, when pressure from the Blue Raider defense line forced Jake Lange into a lofted prayer of a throw. DQ Thomas caught the sitting duck in a sprint and ran the ball back 43-yards for the score, giving Middle Tennessee a 35-10 lead.

Quincy Riley picked off an underthrown ball from Tee Webb to ice the game early in the fourth quarter. It was Middle Tennessee's third interception and fifth takeaway of the game.